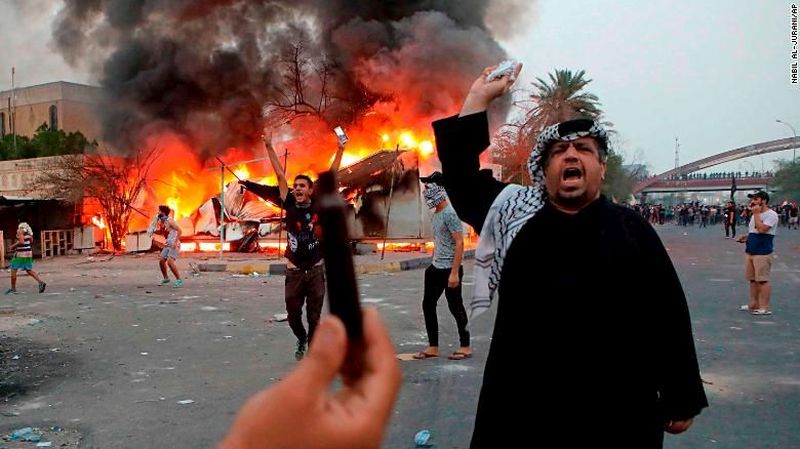 Oil-rich southern Iraq has been aflame for two months, the rioting spreading out of the big port of Basra across the Shiite heartland cities of Amrah, Nasiriyah, Samawa and the shrine towns of Najaf and Karbala. The demonstrators are venting their rage over electricity cuts, poor services and unemployment, as politicians in Baghdad struggle unavailingly to form a post-election government. The protesters have stormed government offices and Shiite militia premises and briefly disrupted the international airport of Najaf. Most recently the violent confrontations with police forces spread to the capital.

This is the worst outbreak of popular disaffection against Iraq’s ruling circles the country has ever seen. It has left scores of dead and hundreds of wounded among the demonstrators and police. Much of the violence is directed against pro-Iranian Shiite parties and militias, whose offices have been torched amid anti-Tehran slogans and images burned of Iran’s supreme leader Ayatollah Ali Khameini.

The turbulence was sparked in the first place on July 4 when Iran cut off electricity to Basra to punish Iraq for defaulting on a debt. Mid-summer temperatures had hit 48 degrees Celsius. This was just an excuse. Tehran had decided to stir up turmoil in Iraq as a muscle-flexing exercise to warn the Trump administration how much instability could be sown in Iraq and other parts of the Middle East if Washington went through with its sanctions on Iran’s oil sales on Nov. 4.

The outbreak laid bare Iraq’s Achilles heel in the year 2018, deep corruption in all walks of government, including the army and the forces of law and order. It has reached the point where one of the world’s biggest oil exporters is incapable of guaranteeing its population regular power, food or medical services. “Thieves rob us in the name of religion!” is a popular protest slogan.

Incumbent Prime Minister Haidar al-Abadi’s position is shaky. He leads a caretaker government that must stay on until the parties, none of which gained a majority in the May elections, can agree on a coalition government. It will then be decided whether he stays on for a second term or makes way for a new prime minister.

The largest number of seats was won by the Shiite cleric Moqtada Sadr’s bloc, which stands alike against US or Iranian influence in Baghdad. The cleric can’t officiate as prime minster since he did not stand for election. Sadr has ordered his substantial following to join the protesters in the streets of the Shiite South, with the paradoxical result that the unrest against central government is being whipped up by Iran as well as by its foremost Iraqi opponent.

The deadlocked negotiations for a new government and the unending demonstrations have led Iraq’s Shiite spiritual leader Grand Ayatolah Ali Sistani to come out publicly in support of the protesters. He is calling urgently for a government of technocrats to be installed in Baghdad under the leadership of a strong, bold figure who is determined to fight corruption.