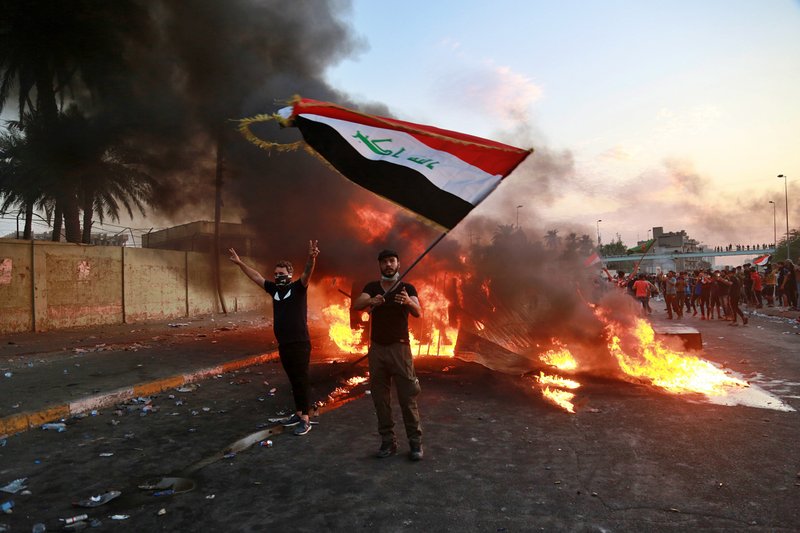 Iraq’s masses have plenty of cause to protest their lot – galloping unemployment, poor services – but why now? Is one hand or more than one stirring up the trouble? It is becoming evident that not all the casualties are down to clashes with security forces. And so, on Saturday, Oct. 5, four civilians were revealed to have been shot dead in Baghdad by “anonymous snipers.” Who sent those snipers? A hidden hand is apparently at work to whip up the turbulence to a pitch high enough to jeopardize the already fragile government headed by Prime Minister Adel Abdel Mahdi.

This government was finally established as a weak compromise after a long stalemate following Iraq’s general election last year. It has never been stable enough to pursue a clear and consistent policy on any issue, least of all the country’s profound security and economic woes.

The protesters’ grievances are convincing. Unemployment runs at 7.9pc – up to 20pc among young men – while a quarter of the population of 40 million lives in abject poverty with an average income of $2 a day.

Their plight is all the more painful in a country that holds around a quarter of the world’s oil reserves and exports 5 million barrels day (roughly half of the Saudi output). Iraq could be one of the wealthiest countries of the Middle East if only its earnings did not vanish inside a convoluted web of corruption.

The wave of disaffection gives Iran fertile soil for its plan to dominate Baghdad; and it gained an extra fillip from the removal of a major obstacle from its path.
In the second half of September, the prime minister sparked the first demonstrations by the removal of the popular Gen. Abdul Wahhab al-Saadi as commander of the Iraqi Counter-Terrorism Service to a post in the defense ministry. This service is the only effective operational branch of Iraq’s armed services. The general was acclaimed as a national hero for leading the operation that routed the Islamic State and drove the jihadists from the roughly 50 percent of the country’s territory they had seized. Al-Saadi is also admired as that rare bird, an honest official. Tehran and its satellite Iraqi Shiite militias found in the popular general a major impediment to their plans to gain control of Baghdad and the national army.
The demonstrations’ concentration in the Shiite district of southern Baghdad and the predominantly Shiite south, whereas the Sunni north has stayed calm, points to the guiding hands. The southern towns of Nasiriya, Hilla, Diwaniya and Armara, the focal points of the outbreaks, are the domains of pro-Iranian Iraqi militias.  Their chiefs, if so ordered by Tehran, could stop the protests and restore calm, but that order is not forthcoming because of Iran’s interest in pushing the disorder to its limit.
DEBKAfile’s sources recall that the Shiite cleric Muqtada Sadr, head of the largest bloc in the Iraqi parliament, paid an unexpected visit to Tehran on Sept. 11. This visit caused much surprise because Sadr was reputed to be a leading opponent of Iran’s presence in Baghdad. Yet, all of a sudden, he appeared in a photo together with Iran’s supreme leader Ayatollah Ali Khamenei and its Middle East commander, the Al-Qods chief Gen. Qassem Soleimani. The content of their conversation in the ayatollah’s private office was never revealed. But it is self-evident that Soleimani’s participation could only mean that religion was not their main topic.

On Saturday, Oct. 5, when Prime Minister Abdel-Mahdi lifted the curfew over Baghdad, Muqtadr called for a new general election in Iraq. It may be assumed that, acting on the deal he reached during his Tehran visit, he is aiming for an election to grant his own faction plus the pro-Iranian militias’ political groups a parliamentary majority. They will then have the power to annul the prime minister’s decrees in recent weeks to disband those militias and integrate them in Iraqi army units. The door would then be open for Tehran to gain a solid foothold in Baghdad.

70 thoughts on “The hidden hand stirring up unrest in Iraq at cost of 100 lives, 4,000 injured: Sadr at Tehran’s behest”