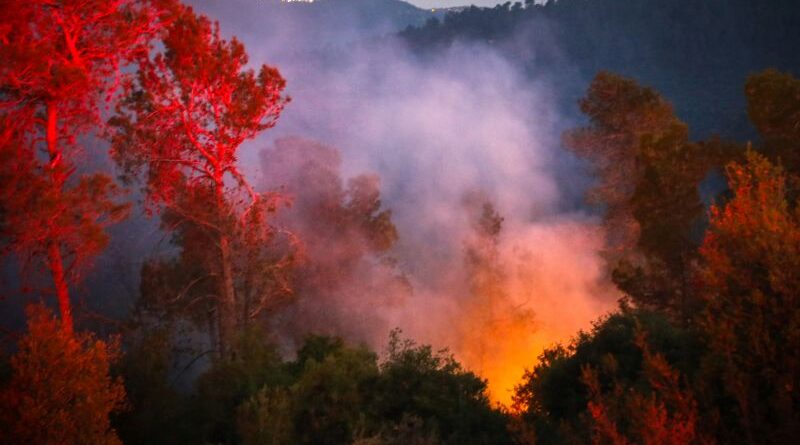 After 7 rockets were aimed at Jerusalem from Gaza on Saturday, Israel’s security cabinet ordered the IDF to go forward with a “significant” operation against Palestinian terrorist targets in the Gaza Strip. The operation to seriously incapacitate Hamas and Islamic Jihad, which by Tuesday morning, May 11, had shot 250 rockets into Israel, was confined to an aerial offensive to be rolled out over several days. Ground incursions were ruled out for now. Its designation as “Guardian of the Walls” denoted the operation’s defensive rather than offensive nature.
The guidelines given to the IDF and its Air Force had the same goal of “containment” aimed at restoring calm, which the police had received in its effort to quell Palestinian mob violence in Jerusalem. (Picture shows blaze caused by rocket at Jerusalem hill village.)

Hamas’ ultimatum to Israel on Saturday, followed by a 7-rocket barrage on Jerusalem, betrayed the regional slant acquired by the unending Israel-Palesitnian duel. When Israel ignored the first ultimatum, Hamas’ military arm’s spokesman, Abu Obeida issued another one after midnight, warning Israel to “end the siege of a group barricaded inside Al Aqsa Mosque.” Jihad leader Ziyad Nahala chipped in to say: “Israel started the aggression in Jerusalem and if does not stop, there is no point in diplomatic efforts for a ceasefire.”

DEBKAfile’s intelligence sources reveal that, throughout this interchange on Monday, the Palestinian organizations of the Gaza Strip were being directed by a shadowy master: Iran had been managing the crisis through its Lebanese proxy Hizballah from Beirut.  In fact, Tehran had set up at Hizballah HQ a joint war-room manned by the Revolutionary Guards, Hizballah and the Palestinian Hamas, Popular Front and Islamic Jihad.  The intensive efforts made by Egypt, Jordan and Qatar to negotiate a ceasefire slammed fruitlessly against this wall.

Realizing what they were up against, Israel’s military chiefs Monday night extended the alert zone for rocket attack from a 40km radius outside the Gaza border to 80km and as far as the Tel Aviv conurbation. In the event of a further Palestinian escalation or a rocket attack on Tel Aviv, the cabinet will be forced to revise its guidelines to the IDF and authorize ground combat as well as air strikes. “Containment” does not allow for a knockout blow against the terrorist organizations’ offensive capabilities. Their weapons stores, rocket launch pads and commanders’ hideouts are all safely interred in underground tunnels and bunkers and are therefore out of reach for aerial bombardment. Since the strings of this crisis are in Tehran’s hands, the immediate outlook for the current crisis is unclear.