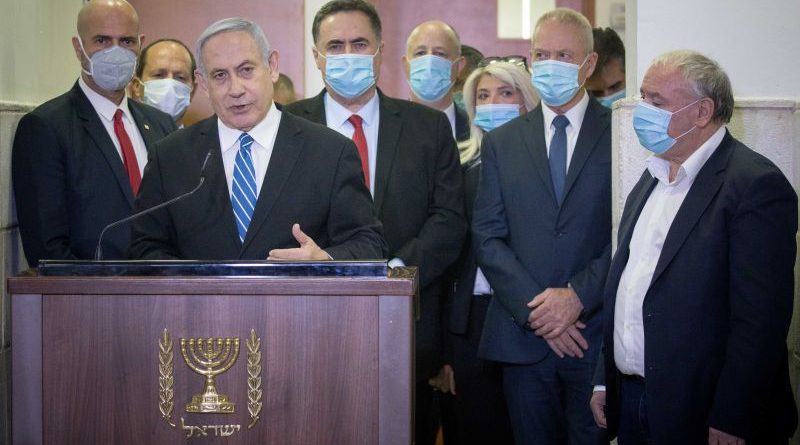 The trial of PM Binyamin Netanyahu and his three co-defendants will continue on July 19, the three-judge panel of the Jerusalem District Court announced at the opening session on Sunday, May 24. The charges of bribery, fraud and breach of faith were read out to the defendant, the prime minister, and he confirmed, “I have read and I understand the charges.” Netanyahu’s co-defendants are Yediot Aharonot chief editor, Arnon Mozes, the controlling shareholder of Bezeq telecom, Shaul Elovitch and his wife, Iris. All four lawyers asked for enough time before the next session to study the mountainous volume of investigative material on their cases. The judges agreed to schedule the next session on July 19. The added that the defendants were not required to attend, only their attorneys.

The Elovitch’s lawyer, Jack Chen asked the court to caution the witnesses against conducting a parallel trial through the media. “We want the trial to go forward before this court. If prosecution witnesses give press interviews, it will be a circus,” he said.

At the end of the session, Prosecutor Liat Ben Ari promised to caution the witnesses against granting press interviews.

Binyamin Netanyahu delivered his j’accuse outside the Jerusalem District Court minutes before the opening of his trial on three counts of corruption. Repeating the demand for the live broadcast of the proceedings (which the court had already denied) “to prevent editorial distortions and censorship,” he also called for the publication verbatim of the investigation conducted against him. This would expose what he called the illegal practices of “intimidation and threats against witnesses’ families,” which were used to extract evidence against him. Failing to bring the “right down in election after election, Netanyahu, said, they resorted to foul methods to remove the national camp from power for years to come. “I go into court with a straight back and a head held high,” said Netanyahu, “because I know that the people are with me and I’m not alone.”
Outside the court, several hundred flag-waving, shouting demonstrators showed their support for the prime minister, who arrived in court from the first cabinet meeting of the new unity government over which he presided. A large group of Likud ministers and lawmakers in face masks took seats in the public gallery.