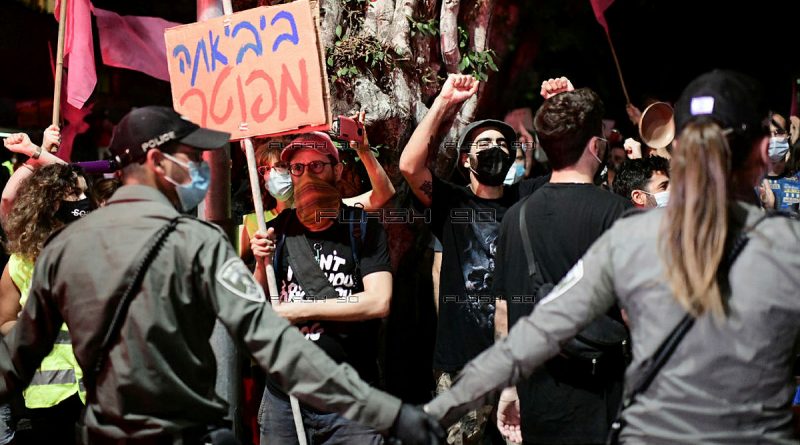 The lockdown, imposed by a panicky Israel when new covid cases soared to 9,000 per day, is biting. The Health Ministry reported on Wednesday, Oct. 7, a drop in positive tests to 10.2pc out of nearly 50,000conducted – down from nearly 16pc two weeks ago. Nevertheless, the Coronavirus Cabinet led by PM Binyamin Netanyahu insisted on extending the closures for another week, up until Oct. 19. They resisted insistent calls to remove the chains forthwith from the shrinking economy and rising unemployment.

The ministers complied with the advice of Coronavirus Director Prof. Ronni Gamzu and other experts. He attributed the “slight decline” in infection to the “very effective” nationwide lockdown, but urged keeping the closures in place for at least another week, specifically for schools and non-essential businesses, because only then “would we have have better sense of the infection spread.”

“Anyone comparing coronavirus to flu does not know the virus which has wrought havoc on medical systems the world over,” he pointed out as a warning that the virus still presented an unpredictable menace and must therefore be handled with extreme caution.

On the practical level, Gamzu pointed out “I cannot say definitively that the infection is down everywhere.” This was a reference to the government’s primary problem. While the pandemic’s level is down to 8 percent countrywide it still stands at 23pc in the ultra-Orthodox populations. The professor, backed by most ministers, has urged a policy of differentiating between hotbed and other regions. This outrages the ultra-Orthodox leaders and their powerful cabinet ministers over what they consider to be discrimination against their community, which by and large does comply with the rules. However, TV cameras focus on the violent skirmishes night after night with dozens of arrests in Jerusalem, Modiin Ilit and Bnei Brak between young extremists and police, who attempt to impose health restrictions on crowding and worship in synagogues.

While the government is trying to set a target figure of, say, 2,000 new cases a day before approving significant breaks in the lockdown, its attempt to separate the hotbeds from the rest is stalled by two factors: one out of every four coronavirus victims is ultra-Orthodox – is one The other is that the confirmed cases within the general population are widely scattered among 92 localities.

The government is also divided over its strategy for opening up the economy in easy stages weeks apart, so that the impact of each on the level of infection can be safely tested after each, before going forward to the next. The hasty exit from the first lockdown is blamed for the uncontrolled surge of disease that precipitated the current closure.

That too is a matter of controversy within the government. Kahol Lavan ministers challenge the order set by Netanyahu and his Likud. It is generally held that nursery schools should be reopened first, to release young parents’ return to jobs, but the former is also pressing for the reopening of small businesses. But the overriding bone of contention is a demand by the latter to take the brakes off anti-government demonstrations, on the contention that restrictions on mass protests are a violation of democratic principles. They also argue that they are motivated less by health considerations than by the fact that they are directed against Netanyahu in person.

For now, the protesters are trying to beat the restrictions by staging small rallies up and down the country, their participants properly masked and separated by 2 meters. But their leaders say they are ready to disobey the restrictions and openly challenge the government and the police. Some are calling for another election, which would be the fourth in less than two years. Some of the most radical claim even that covid-1 is a political invention to keep the prime minister in power.

There are no short-term remedies either for the controversies or the coronavirus. Gamzu estimated there will be no effective vaccine for coronavirus before the new year, at the earliest.