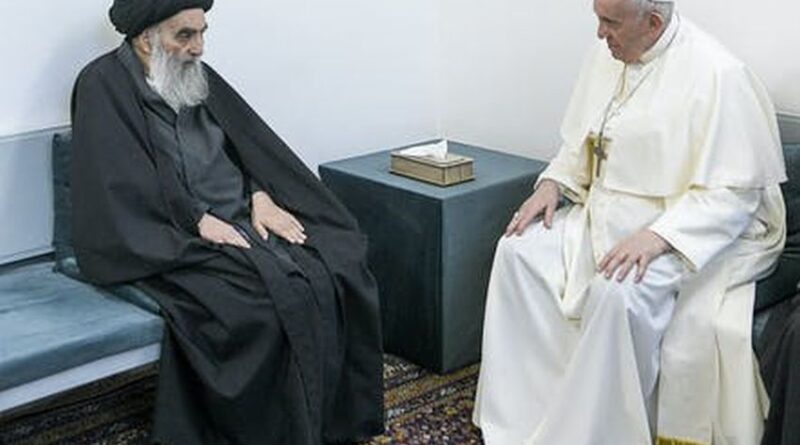 The first summit ever to take place between the spiritual leaders of two great faiths, the Roman Catholic Church and Shia Islam, was minutely staged in long negotiations. The encounter between Pope Francis and Grand Ayatollah Ali Sistani r on Saturday, March 6 was decades in the making, one that eluded the pontiff’s predecessors. “Najaf did not make it easy for the Vatican,” said one of the planners.

This landmark event may not herald a meaningful breakthrough for interfaith dialogue. But it was important enough to persuade the pope to give up on his hope of a jointly signed document pledging human fraternity, like the one he signed with Sunni Islam’s grand imam of al-Azar Ahmed el-Tayeb in Egypt. Before coming, he was told exactly what to expect: “His Eminence will provide His Holiness with a spoken message of peace and love for all humanity,”

But geopolitical tremors may start rumbling from the quiet encounter at Najaf. In an exchange of simple marks of respect, globetrotting Francis, 84, walked on foot down a narrow alley of 30 meters and removed his shoes before entering the reclusive grand ayatollah’s modest apartment. Sistani, 90, who rarely receives visitors, made an exception by rising and standing to greet the pontiff at the door and inviting him to take a seat.

The Pope was offered tea. Gifts were exchanged. They were alone for part of their 40-minute encounter except for interpreters.

The grand ayatollah’s modest, reclusive lifestyle, in striking contrast to the rich trappings of the Vatican, belies the enormous prestige and authority he enjoys as the pre-eminent spiritual leader of the Shiite world. Although he preaches against Shiite clerics holding government office, such as they do in the Iranian system under supreme leader Ayatollah Ali Khamenei, Sistani has nevertheless weighed in at key moments to guide Iraq’s majority Shiite community.

One fatwa sent its members to the polls in the country’s first real election after the US 2003 invasion; another called on its menfolk to fight the Islamic State, swelling the ranks of the Shiite militias, which were subsequently manipulated by Iran’s Gen. Qassem Soleimani.

Sistani does not make public appearances, rarely receives foreign dignatories, but he is revered worldwide as a religious scholar and the leading light of the Najaf seminaries against which Iran’s Qom seminaries compete. While neither Tehran nor Qom have said much on the papal visit to Najaf, it has clearly put some noses out of joint. By choosing Sistani for this meeting, the pontiff implicitly recognized him as the chief interlocutor of Shiite Islam over the Iran’s supreme leader Khamenei.

Francis’ first visit to Iraq, home to four Shiite shrine cities, was described as a mission “to console and encourage” the victims of decades of civil war and terrorism, suffered not least by the Christian community, whose numbers declined from 1.5 million in 2003 to 300,000 today. He raised the issue of their security when he talked to the grand ayatollah.

“I see the pope’s visit to Najaf as the culmination of a global movement in the Islamic-Christian tradition to promote security and peace in our country, against tendencies towards violence and intolerance,” Iraq’s Culture Minister Hassan Nadhem told reporters ahead of the visit.

The Iraqi government fears that Shiite militias backed by Tehran may turn the rockets they have been aiming at American targets on Baghdad or elsewhere as a mark of Tehran’s displeasure over the pontiff’s visit.

Sistani’s public statements have supported reconciliation between Shia and Sunnis and ethnic peace. But Tehran is averse to broad Islamic dialogue and still more to bridging the faith with other religions. For the Islamic Republic, Christianity is heresy. Christians, Jews and other faiths there face discrimination and social segregation  Conversion is punishable by death.

Interfaith dialogue is therefore far removed theologically and politically from the revolutionary republic of Iran, when even interaction with the majority Sunni faith is marked by armed conflict rather than intra-Muslim ecumenism