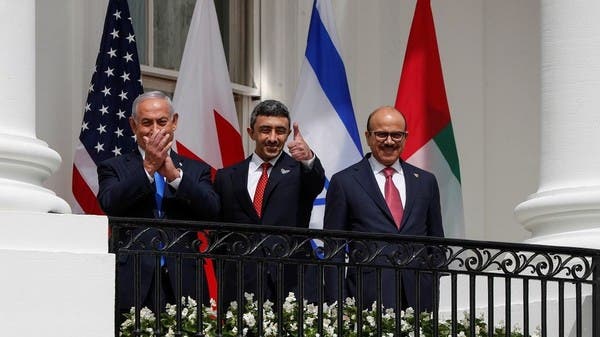 PM Binyamin Netanyahu signed formal pacts with the United Arab Emirates and Bahraini FMs Abdullah bin Zayed Al Nahyan and Abdullah bin Rashid Al Zayani on Tuesday, Sept. 15 in a White House ceremony presided over by President Donald Trump. The event was imbued with a profound sense of history, signaling Israel’s acceptance by two important Arab Gulf nations on the basis of mutual benefits and a shared future – without the hassle of painful bargaining – thanks to the mediation of Trump and his advisers.

President Trump who opened the ceremony noted that the lies against Israel fed by hate and fear from generation to generation are no more.  He recalled his visit to Saudi Arabia at the start of his presidency when he offered 40 Arab leaders help to achieve peace if they took their fate in their own hands. Whereas Israel lived under the false charge of attacking of attacking al Aqsa in the past, the door was now opening for thousands of Muslims to pray at their third most sacred site.
Netanyahu who spoke next said that this occasion would have been unimaginable a short time ago. He lavished praise on the US President and his advisers for bring about this “enormous blessing” for Israel on the eve of the Jewish New Year and the promise of “the ultimate end of the Arab-Israeli conflict once and for all.”

Peace between our peoples – not just their leaders – will benefit all our citizens, Netanyahu said. “Together we will combat the coronavirus and benefit the entire region and beyond. The prime minister concluded: “Let is pause for a moment and feel the pulse of history that will endure long after coronavirus is gone.”

UAE FM Abdullah Al Nahyan stressed the peace motif in his speech along with cooperation for technological advancement. The Bahrain FM Abdullah Al Zayani called for peace among all nations of the region “regardless of religion, gender and ethnicity” for the sake of security and prosperity. He joined the Emirati foreign minister in calling for recognition of the Palestinians’ rights.

They all then sat down to sign the two documents in English, Hebrew and Arabic: the Peace Treaty with the UAE and the declaration of peace wiht the Kingdom of Bahrain. Neither text has so far been released to the public.