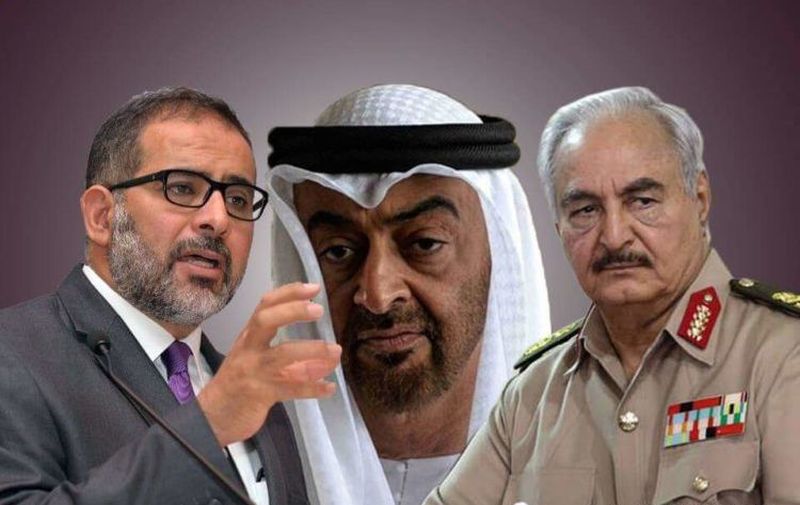 After failing to capture Tripoli in four months of fierce fighting, Libyan Gen. Khalif Haftar and his Libyan National Army stand to lose their leading military, financial and intelligence backer, the United Arab Emirates. The UAE is considering switching its support to Dr. Aref al-Nayed, a controversial Libyan politician, and make him prime minister of the eastern Libyan Tobruk government with some of the powers divested from the LNA. The Emiratis’ end game is for a national unity government ruled by Al-Nayed to rise out of unification negotiations brokered by the UAE between the Tobruk administration of the east and the UN-recognized Tripoli government of the west.

On July 20, Al-Nayed said he was willing to form a government if asked to do so by the Tobruk parliament and had a program ready to go.

Dr. Al-Nayad who serves as Libya’s ambassador to Abu Dhabi, is a world-renowned Islamic scholar and the founder and director of the Kalam Research and Media based in Tripoli and Dubai. Before Muammar Qaddafi was overthrown in 2011, he lectured on Islamic theology, logic and spirituality at the restored Uthman Pasha Madrassa in Tripoli. After that upheaval, he was named head coordinator of the Libya Stabilization Team. He is also the secretary of the Free Ulema-Libya, an association of religious scholars from all parts of Libya representing “different schools and outlooks” according to its statements.

To promote his candidacy as leader of both halves of Libya, UAE agents have opened doors for Al-Nayed in the eastern provinces for him to seek the endorsement of local tribes as the Emiratis’ choice for future leader of a united Libya.

Abu Dhabi’s disappointment in Gen. Haftar may be measured by the weight of its support for his cause. Whatever he asked for, whether arms, fighter-bombers or funds, he received. Abu Dhabi even persuaded Washington, Saudi Arabia and France to throw their support behind his campaign to capture Tripoli and take on the leadership of a united Libya.

Not all of them have lost faith. Washington was never fully engaged in the Libyan conflict. Paris and Cairo, however, still believe in Haftar’s star and have even stepped up their military and political assistance to his LNA.

This situation hampers the UAE’s drive to move past the Haftar episode. Abu Dhabi can’t completely sever its military support for the Libyan general but must bide its time, in the hope that the Libyan National Army will come around to the Emiratis’ end game.