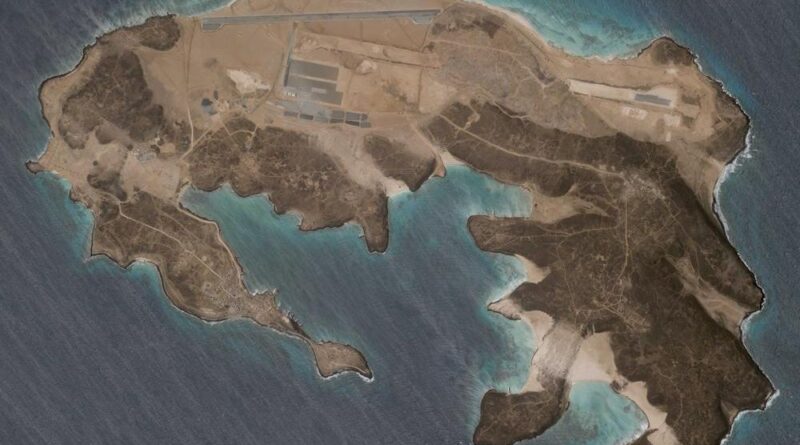 The mysterious air base being built on Mayun island in the Red Sea’s Bab al Mandeb Strait is revealed by DEBKAfile as a United Arab Emirates military project. An attack helicopter base on the island, commonly called Perim, will give the Emirati president  Sheikh Mohammed Bin Ziyad the means of controlling oil tanker and commercial shipping through the Red Sea’s southern chokepoint and up to the Suez Canal. It will also give the Emirates a jumping off pad for rapid deployment forces to reach Yemen, although they withdrew from the civil conflict there during 2019-2020.

This is not the first Emirati visit to Perim. Five years ago, they built a massive runway across the tiny island, which they abandoned, in favor of a bid to capture the southern Yemen port of Aden. although in 2020, they handed it over to their ally Saudi Arabia.

Finding itself bereft of a military foothold at the southern entry to the Red Sea, Abu Dhabi asked the Saudi-backed Yemen President Abd Rabbu Mansour for a 20-year lease on Perim island. When this was turned down in April, Sheikh Ben Ziyad took matters in his own hands and revisited the island. Since early May, UAE vessels loaded with heavy engineering equipment, building materials and troops have been sighted putting into the island, raising rumors of a mysterious air facility “which no country has claimed.”

Five years ago, the Emiratis built a 3km runway athwart the 5.6km long island that was designed at the time for fighter jets and heavy bombers. Today, a runway of 1.85km, suffices for helicopters and can be finished in a few days. The satellite photo attached to this article shows the helicopter port covering most of the tiny island. It is due for completion next month

That assault helicopter base radically shifts the balance of force in this sensitive international shipping region. It ties in with the Israeli attack in the first week of April, of an Iranian forward command and surveillance ship called Saviz that was stationed in the Red Sea. DEBKAfile’s military sources report that Israel acted at the request of Abu Dhabi and Riyadh in view of the high peril posed by this Iranian presence to Red Sea shipping and coastlines. That operation which knocked the Saviz out of action and the establishment of the new Emirati helicopter base at Perim arms the UAE, Saudi Arabia – and through them, Israel – with the means of control for safeguarding that important sea route.