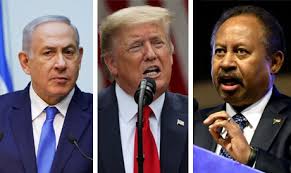 Sudan’s consent to normalize ties with Israel and end the state of belligerence between them, that was sealed by President Donald Trump on Oct. 23, is significant in a different way from last-month’s peace deals with the UAE and Bahrain. Under its deposed leader Omar al-Bashar, Sudan was long a bitter enemy which fought in two Arab wars against Israel, was once tied to Iran by a military alliance and crucially supported the Palestinian Hamas as well as al Qaeda.

Secretary of State Mike Pompeo therefore trod a minefield on his path for swinging Sudan over to normal ties with Israel – even after the Bashir regime was purged last year. Removing Sudan from the US list of terrorism sponsors was contingent on Khartoum paying compensation to Al Qaeda’s victims in the bombings of US embassies in Kenya and Tanzania in 1998.

Shortly before the Israel-Sudan deal was announced – 11 days before the US presidential election – Trump notified Congress of “his intent to formally rescind Sudan’s designation as a State Sponsor of Terrorism.”

Its decision will free Washington to grant the transitional government access to billions of dollars of financial assistance, desperately needed for an economy crippled by decades of Bashir’s misrule, internal conflict and political upheaval, as well as the covid-19 pandemic.

After the joint communique, PM Binyamin Netanyahu could not resist recalling Sudan’s radical history from the three “noes” pledged by the Arab summit in Khartoum after the 1967 war – no peace with Israel, no recognition and no negotiations – to a new era of yeses. He hailed the ending the cycle or war and the start oof economic and trade relations, focusing on agriculture.

Formal diplomatic relations will come at a later stage. Completing the normalization process is subject to approval by the yet-to-be formed legislative council under a power-sharing deal between the military officers and the civilians, who have been running the country jointly since the overthrow of Bashar last year, under the leadership of  Abdel Fattah al-Burhan.

The timeline for this process is not clear.The political situation in Khartoum is therefore fragile.

Iran once maintained warships in Port Khartoum and an arms factory for smuggling weapons to Hamas through Sinai. Then, in 2015, The Bashir regime swapped its ties with Tehran for an alignment with Saudi Arabia and the United Arab Emirates. Today, both Gulf rulers share the strong US and Israeli interest in preventing Tehran from using the political uncertainty in Khartoum for regaining a foothold in Sudan. From there, the Islamic Republic could hope to spread its wings to such targets as the Red Sea, Gulf of Aden, Horn of Africa and the African interior.

Thriving relations with the US and Israel are expected to further distance post-Bashir Sudan from the radical camp.