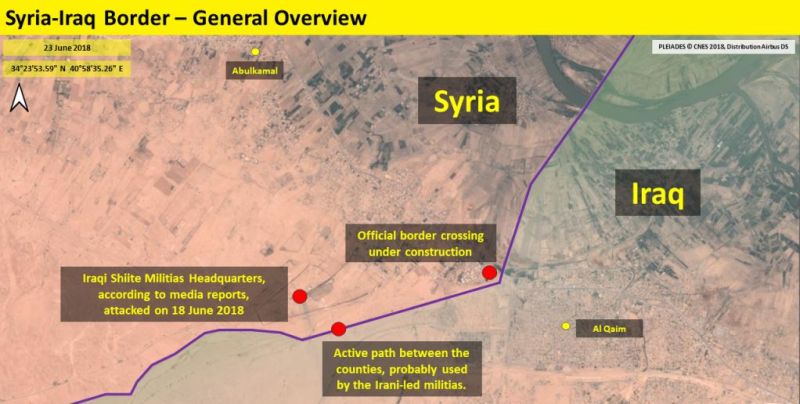 The Iranian, Syrian and Iraqi chiefs of staff got down to brass tacks at their first session on Monday, March 18 in Damascus. The primary assignment entrusted to Iran’s Maj. Gen. Mohammad Hossein Bagheri, Syria’s Gen. Ali Abdullah Ayyoub and Iraq’s Gen. Othman al-Ghanim was to reopen the Syrian-Iraqi border to free movement of goods and people, in keeping with the deals struck by Iran’s supreme leader Ayatollah Ali Khamenei and Syrian President Bashar Assad on Feb. 25 in Tehran.

Assad opened the door to the trilateral task force by demanding that the United States remove its military forces from Syria. This would remove a major barrier in the path of the project for reopening the 615km-long border shut since 2014.

The three generals are tackling two intersected goals, say DEBKA Weekly’s military and intelligence sources: An open Syrian-Iraqi border is the sine qua on for Iran’s long-coveted land bridge to the Mediterranean. The shared project will be the cornerstone for a new Iran-led regional strategic axis totally divorced from Russian or US involvement.

The generals emerged from their first session on Monday with a detailed plan of action, as our sources can reveal:

1. The Iranian, Syrian and Iraqi armies will start work by opening the Al-Qa’im Abu Kamal Crossing which is 8km from the Iraqi-Syrian border. The Iraqi town of Al-Qa’im is located in Anbar province, near the Syrian border, on the banks of the River Euphrates, and nearly 400km northeast of Baghdad. (See map.) It has a population of around 150,000. This crossing is to be a focal point on the projected Iranian land bridge. It falls mainly inside Iraq and is under the control of the Iraqi military. The US forces stationed in eastern and southern Syria can’t determine what is going on there, which is why the three army chiefs decided to start out by opening the Al-Qim Abu Kamal crossing – and not Al-Waleed.

The Al Waleed crossing in the Ar-Rutba district, another part of Anbar province, is close the westernmost point of Iraq and northeastern Jordan, and therefore under the control of the US Al-Tanf garrison.

2. A special military force will be put together from Iraqi army contingents and the Iraqi Shiite Popular Mobilization Forces (PMU), which is a state-sponsored umbrella organization composed of some 40 mostly Shiite militias under the command of Iran’s Revolutionary Guards (IRGC). This army will spread out the full length of the Iraqi-Syrian border and take charge of it.

3. On the other side of the border, the Syrian army in the east is assigned with dealing with nomadic Sunni tribes, which roam back and forth across the border at will. Assad’s army must wrest control of this area from the tribes’ paramilitary organizations. DEBKA Weekly’s sources evaluate this task as being outside the Syrian army’s resources: In the first place, the soldiers are too thin on the ground to capture and hold this stretch of territory for long; and, in the second, to reach this part of the border, Syrian troops would have to cross the Euphrates River to the east bank, which the American troops posted there have consistently blocked in the past.

4. The Iraqi army plus the PMU will secure the daily passage of 128,000 barrels of Iranian oil promised Syria in the Khamenei-Assad deal, from its point of departure in the west Iranian town of Kermanshah. Iran and Iraq gained previous experience in cross-border transfers of large quantities of oil, by moving 300,000bpd of crude from Kirkuk to Iran for several months.

5. The road link from Al Qa’im to Syria is in a bad state of disrepair after eight years of warfare. It is unusable as a regular route for heavy oil tankers. IRGC engineers will organize the necessary repairs.

6. According to the plans drawn up by the three generals, the oil tankers bound for Syria will be fitted with Iraqi number plates when they cross from Iran into Iraq, so that the oil convoys entering Syria will ostensibly be licensed as Iraqi vehicles which the US forces and Syrian-Kurdish militias on their route will not be authorized to stop.

An operation on this scale will definitely not be organized purely for the delivery of fuel to Syria; the convoys will certainly be used as well to ferry fighters and military equipment from Iran to Syria.