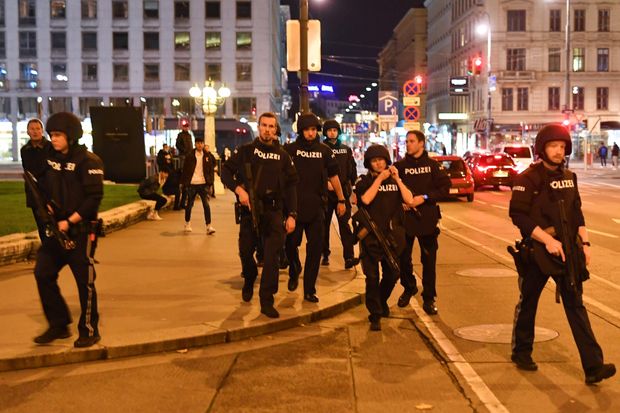 Two men and two women died when several gunmen opened fire on multiple locations in central Vienna Monday night, Nov. 2. Fifteen were injured, some seriously. Interior Minister Karl Nehammer told a news conference early Tuesday that the gunman shot by police carried an assault rifle, wore an explosive vest and was an ISIS sympathizer. He said at least one “heavily armed and dangerous” attacker was at large. He urged people to stay off the streets, avoid public transport and not take their children to school.

The number of gunmen is still not clear, although some reports cite ten. They are the objects of a major manhunt in Austria and outside its borders. Neither is it clear whether Vienna’s main synagogue, City Temple, was the main target, although a police officer outside the entrance was among the victims. The synagogue was locked at the time. It is surrounded by bars and restaurants that were humming with revelers on the night before a month-long lockdown was imposed at midnight against the covid pandemic. Rabbi Schlomo Hofmeister said he saw at least one person shoot at people sitting outside bars below his window. “They were shooting at least 100 rounds just outside our building.”

Austrian Chancellor Sebastian Kurz called it a “repulsive terror attack.” Police officers said the operation was still ongoing and continue to patrol the streets. Kurz said these were “difficult hours for our republic” and vowed: “Our police will act decisively against the culprits of this despicable terror attack.”

It came weeks after France was hit with two horrifying terror attacks by Islamic extremists, who murdered three people in a Nice cathedral and beheaded a schoolteacher in Paris.