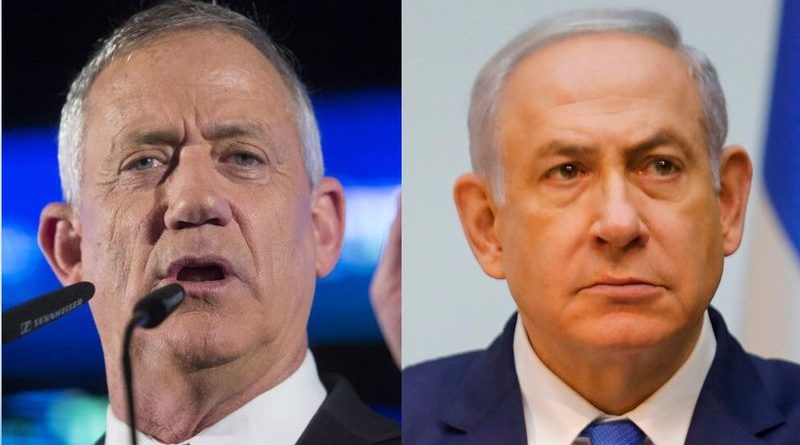 Likud leader PM Binyamin Netanyahu and Kahol Lavon’s Benny Gatz signed an accord on Monday April 20 for a national emergency government coalition, so ending the political impasse which dogged Israel for more than 16 months during three inconclusive elections. The premiership will rotate between the two leaders, Netanyahu serving first with Gantz as “Alternate Premier.” The two will change places after the first 18 months of their three-year term. Gantz will also serve as defense minister with foreign affairs and justice assigned to his party. Likud and its right-wing bloc will hold the Treasury, Transport and Public Security (police) portfolios. The government will consist of 30 ministers divided equally between the Likud bloc and Kahol Lavan with more added at a later stage.

The two parties will seek Knesset majority approval for their accord and post it to the president.

DEBKAfile reported earlier on Monday. PM Binyamin Netanyahu and Kahol Lavan leader Benny Gantz met on Monday morning, April 20, hours ahead of a cliffhanger, a critical Knesset session. The two leaders have come to a broad understanding on most national issues but the deal will stand or fall depending on Benny Gantz’s handling as Knesset Speaker of the draft laws, which he helped craft in the pre-coronavirus period, for disqualifying any lawmaker under criminal indictment from serving as prime minister.

The Speaker sets the Knesset agenda and may delay votes and proceedings. Netanyahu’s Likud faction has warned that the tabling of this law is a game-breaker for any power-sharing deal. Gantz at one point countered with his own ultimatum: if coalition talks fail, the law goes through. His former associates in the opposition bloc are leaning hard on him to follow through – even though this legislation may condemn the Knesset to a life expectancy of just over two weeks. In that space of time, the lawmakers must either confirm a new majority government or call Israel’s fourth election in 16 months.

Netanyahu and Gantz have agreed that the premiership would change hands after 18 months. Netanyahu is to go first, with Gantz serving as deputy. They would change places at mid-term. Portfolios would be allocated equally.

But the threat to cut short Netanyahu’s long rule at the head of government and leave Gantz as sole premier is under battery from two more directions. The High Court could at any time rule on a petition for proclaiming him unfit to serve under criminal indictment. The judges’ decision is hard to predict, especially since the high court has been accused of unwarranted interference in the legislative branch and the Knesset has in the past sought to override its decisions.

Looming large, too, is Netanyahu’s trial on three corruption charges that is scheduled to open at the Jerusalem District Court on May 24. Emergency regulations imposed for the coronavirus pandemic have restricted the courts to essential cases. The easing up on restrictions on Sunday will allow the courts to start returning to normal business. Netanyahu has consistently claimed that the charges against him were trumped up by his enemies and will be easily dismissed when they come to trial.

He may be banking on Gantz’s reluctance to forego his first go in the prime minister’s office and willingness, therefore, to help remove these obstacles in the path of his ambition..
The prime minister also hopes to profit from Israel’s comparative success in weathering the covid-19 which he actively and visibly piloted. Opinion polls show a general election if held at this time granting him a comfortable majority. It is therefore an option to be considered.

In nearly two months of lockdowns and other restrictions, 172 Israelis died of the coronavirus disease and 13,491 were infected. Significantly, the number of critically ill on ventilators is sliding – from 113 to 109 in the past week – and the rate of infection declining. While strict guidelines for social distancing and hygiene remain in force, the Health Ministry offers hope for further relaxations in two weeks – provided that the current positive trend holds up.