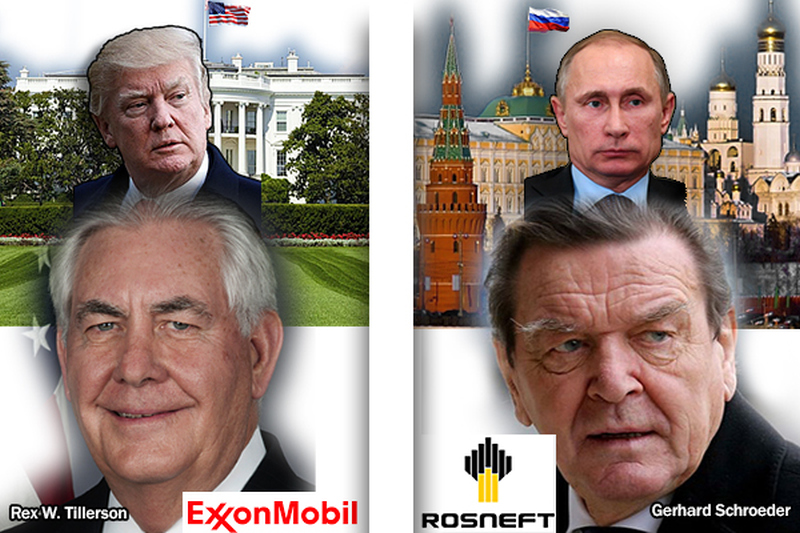 A new player has quietly taken his place at the forefront of the international energy-cum-diplomatic scene. Former German Chancellor Gerhard Schroeder, 73, was appointed on Sept. 29 by his good friend President Vladimir Putin as chairman of the executive board of the Russian energy giant Rosneft.

This put him directly in line against US Secretary of State Rex Tillerson, 65, who from 2006 to 2016 served as chairman and chief executive officer of another energy giant, ExxonMobil.

Did the presidents, Donald Trump and Vladimir Putin just happen to appoint two oil men to strategic positions for determining their foreign policies, or was it by intent? If the latter, does it mean that both their international strategies hinge heavily on energy?

A cursory comparison of their relative assets gives Schroeder the edge when it comes to standing vis-à-vis their masters.

Tillerson has tried to team up with Defense Secretary Jim Mattis to bring a force of order and balance and an independent voice to the chaotic Trump White House. But the president has neutralized them both, while using their efforts to cloak what he is up to. Most recently, he dismissed Tillerson’s bid for direct diplomacy with Pyongyang as “a waste of time.”

Schroeder, in contrast, enjoys a unique position as the first non-Russian to reach one of the pinnacles of power in Moscow and a hand in Moscow’s strategy in foreign affairs. He can afford to present himself as “an independent director as the starting point in his new job” because he can knock on Putin’s door at any time to discuss matters of principle and be sure of a hearing.

A seasoned political operator, he won’t make the mistake of going around Putin to cultivate his own faction in the Kremlin. He will certainly keep his distance from the second most powerful man in Moscow, Defense Minister Sergei Shoigu.

The British master spy Kim Philby who absconded to Moscow in the fifties, for instance, was appointed a general of the Red Army and given a free hand to fashion a Russian counterintelligence apparatus, which up until the present day still confounds its Western counterparts. Philby had inside knowledge of the inborn weaknesses of Western spy services and showed the Russians how to use them.

Schroeder’s artistry lines in the fields of politics and energy. From his years as German chancellor, at the head of an important Western power, he is familiar with the ins and outs of the American political system and knows how to use its weaknesses to further Moscow’s interests.

Whereas Philby settled in Moscow, took a Russian wife and was ostracized by the West, Schroeder operates in a post-cold war environment where he can freely enlist partners who share his pro-Russian orientation from among his many contacts in German industry, banking, the military and intelligence. Indeed, he is rounding up support for an ambitious endeavor, the creation of a German-Russian alignment as the core of an expanded-European Union which will shed dependence on American ties.

Over the past decades, Berlin and Moscow have from time to time thrown up circles who favor a German-Moscow alliance, irrespective of the regimes in power in both places.

While in former times, Moscow cultivated Turkey as its door to the Middle East and the Gulf oil emirates, today, Schroeder conceives of a partnership grounded in energy, with Russian industry and high-tech able to milk the West for its finest technological resources.

Angela Merkel not surprisingly cast aspersions on her pro-Russian predecessor when she campaigned for re-election last month.

But Schroeder, flying high in Moscow, sees a golden opportunity to further his plans in America’s tendency since the last century to pivot away from Europe and the Middle East. This tendency gained momentum during Barack Obama’s presidency and again under President Trump.

The German politician recommends a joint Russian-German move to take over the energy resources and markets abandoned by America. His game plan is built around coupling Russia’s military prowess and energy resources to power Moscow’s advance towards its strategic objectives.

This game plan has already unfolded in Iran, the Syrian war, Libya, Egypt, Qatar and Turkey. Putin is seizing on footholds in the smallest corners of the Middle East, even the Palestinian Gaza Strip to move in. He is hell-bent on taking control of Middle East oil and gas resources and, no less important, the pipelines carrying the energy to market.

Trump proposes later this month to pull the rug from under Iran. (See a separate article in this issue.)

On both those objectives, President Trump and the top US diplomat are divided.

Tillerson is against further exacerbating relations with Iran. He is pressing for negotiations to reach agreed changes in the accord, so as to drive a wedge between the ayatollahs and Moscow.

He firmly objects to Washington lining up behind Saudi Arabia and its allies in the quarrel with Qatar.

With regard to the North Korean nuclear and missile crisis, Tillerson thinks that this too is amenable to dialogue.

Since his appointment, Tillerson has disappointed on two counts: He failed to harness the worldwide circle of friends and contacts he built up as chief executive of ExxonMobil. And he neglected to make use of the State Department’s resources, preferring to separate himself from the department’s regular a staff and operate solo with a few private aides. Neither has he won friends or strong supporters in Washington.

The secretary’s main problem now is his reputation as a dissenter from President Trump on cardinal issues, and, therefore, a rare visitor to the Oval Office.

Talk about his impending resignation as secretary of state became widespread. Therefore, while Schroeder is wholly in tune with President Putin, Tillerson is widely seen as out of step with Trump.

So pervasive were the rumors of his impending resignation that Secretary Tillerson was moved to call reporters to the State Department on Wednesday, Oct. 4 for a forceful rebuttal.

He dismissed reports that he had been on the verge of resigning in the summer over differences with the president when he was persuaded by Vice President Mike Pence to stay on. This never happened because “I never considered resigning from the time I was appointed to this post by the president,” he asserted.

Tillerson lauded the Trump administration’s foreign policy accomplishments, which, he said could only have been achieved by teamwork, citing his cooperation with Defense Secretary Mattis.