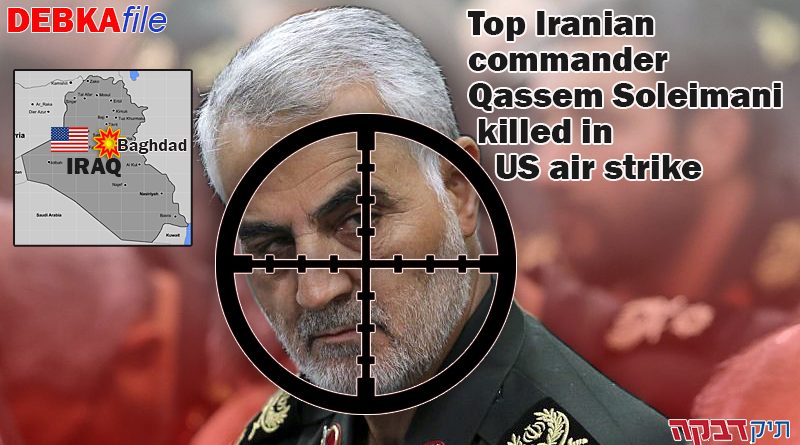 The raid was carried out by US assault helicopters early Friday, Jan. 3 and is said to have killed seven people. US Mid East bases and Israel are on a high state of preparedness for repercussions from Iran.

The Popular Mobilization Units (PMU) is the umbrella organization for pro-Iranian Iraqi Shiite militias, including the Kata’ib Hezballah, which was assigned by Soleimani to carry out major assaults on US bases. Its leaders were at Baghdad airport to collect “high profile guests.”

DEBKAfile’s military and intelligence sources report that Soleimani’s death represents an extraordinary US operational-intelligence feat in which Israeli intelligence may be presumed to have assisted. It ramps up the US-Iranian contest to the level of open war between US forces serving in Iraq – numbering some 5,000 – and Iran’s Revolutionary Guards units operating in the country under Soleimani’s command.

This was the second American strike in Iraq this week. On Sunday, Dec. 29, the US Air Force struck five Kataib Hezballah bases in Iraq and Syria, killing some 25 fighters.
It was also President Donald Trump’s reply to supreme leader Ayatollah Ali Khamenei’s mocking remark that he “can’t do anything to Iran.”

On Thursday, US Defense Secretary Mark Esper commented on the situation in Iraq: “The game has changed. Violent acts by Iran-backed Shiite militias in Iraq will be met with US military force.”