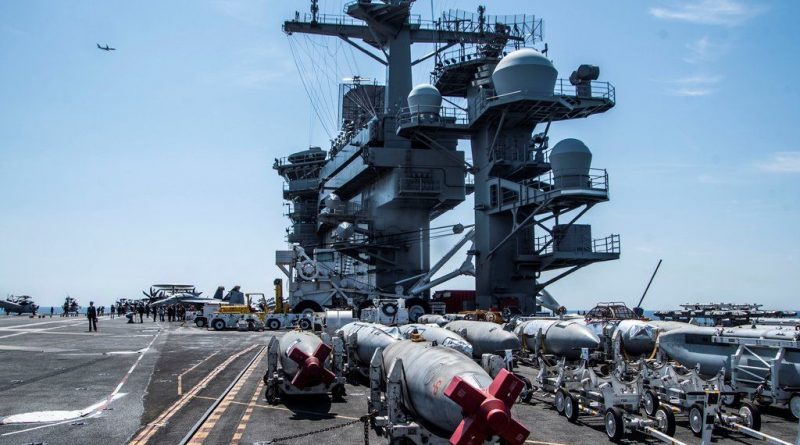 The Trump-Netanyahu conversation on Sunday night, Dec. 1, finalized the arrangements for military coordination against Iran that were set up during recent US generals’ talks in visits to Israel, DEBKAfile reports.
The exchange between the US President and Israeli Prime Minister, covering “the threat from Iran” and “other critical bilateral and region issues,” took place ahead of the NATO summit in London this week and against the background of fresh threats from Tehran against the US and Israel.
DEBKAfile’s military sources note that senior US generals have been in and out of Israel in recent weeks. They included Gen. David Goldfien, head of the US Air Force, Gen. Jeffrey Harrigan, head of US Air Forces in Europe-Air Forces Africa, and Gen. Kenneth McKenzie, commander of US forces in the Middle East. Finally, Gen. Mark Milley, Chairman of the US chiefs of Staff, arrived last week to put the final cap on the program of operational cooperation against Iran drafted by the US and Israeli generals.

No details were released from Gen. Milley’s conversation with IDF Chief of Staff Lt. Gen. Aviv Kochavi, except for a terse statement: “The two generals discussed operational questions and regional developments.”
All these tense talks were accompanied by a significant movement: The USS Abraham Lincoln Carrier Strike Group sailed from the northern Arabian Sea into the Gulf for the first time since June. It passed through the Strait of Hormuz to take up position opposite central Iran.

On Nov. 23, Gen. McKenzie said in reference to Iran’s Sept. 14 missile attack on Saudi oil: “My judgement is that it is very possible they will attack again.” He made it clear that Tehran will be aiming at US and/or allied targets, including Israel.
This threat was spelled out on Friday, Nov. 29, in a speech by Gen. General Allahnoor Noorollahi, adviser to the commander of the Iranian Revolutionary Guards (IRGC) Officers College. He said that 21 of the US bases in the region are in the sights of Iran’s missiles and “Iran has prepared itself for the greatest war against the greatest enemy.”

President Trump goes into NATO summit meetings this week after America and Israel have wound up their estimates and military preparations for a showdown, in an effort to deter Iran from going through with its planned offensive – or else to be ready for counter-attack.