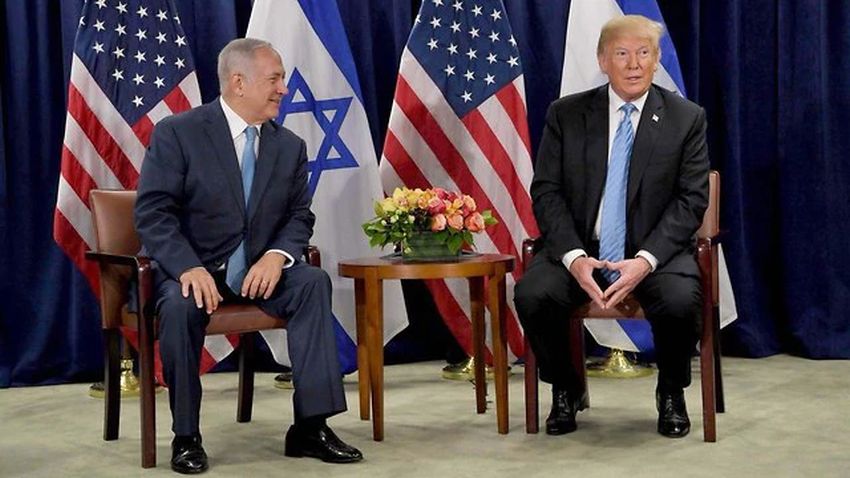 President Donald Trump and Prime Minister Binyamin Netanyahu performed a neat double act for stepping around the issue of the Israeli-Russian crisis when they faced reporters at UN Center on Wednesday, Sept. 27. Trump said, “The US stands behind Israel” while Netanyahu said he had received from the president “everything he asked for.”  So what did he ask for? The answer is: Nothing. DEBKAfile’s sources reveal exclusively that the agenda for this meeting was pre-set. When Netanyahu set off for New York, after an urgent security cabinet meeting on the crisis, he knew that Russian President Vladimir Putin was expecting to see him in the coming days, after the furor in Moscow and Tel Aviv over the Il-20 crash had abated somewhat.  Netanyahu was able to inform Trump that he and Putin had already agreed on certain matters for defusing the crisis:

The issue of the Israeli-Russian crisis was therefore left outside their agenda when Trump and Netanyahu sat down on the sidelines of the UN General Assembly, pending the latter’s interview with Putin.   Both were optimistic about Putin making the right decision to call off the delivery of S-300 missiles to Syria and removing it as an issue. But since on Wednesday, all the balls were still up in the air, a distraction was needed to put the reporters off the scent. “I like a two-state solution,” the US President said half-jokingly, in reference to the Israeli-Palestinian dispute. This served the purpose. The reporters hared  off with a new headline on familiar ground without asking awkward questions about the fresh crisis still hanging over the Middle East.

Iran will dominate Netanyahu’s speech at the UN later Thursday, after his meetings with several world leaders. Palestinian leader Mahmoud Abbas speaks earlier, following a major effort to draw international attention back to the Palestinian issue.