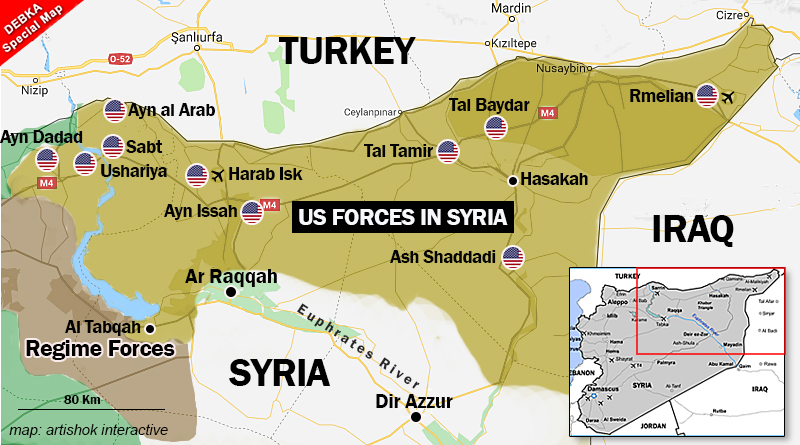 President Trump’s decision to keep US troops in post-war Syria comes ahead of his Friday deadline for re-certifying the nuclear accord with Iran, DEBKAfile reports exclusively from Washington.

The decision to retain US bases in northern Syria after the Islamic State’s defeat not only poses a challenge for the plans Moscow has drawn up for Syria, but is another slap in the face for Tehran. It is a reversal of the former White House policy, designed by Trump’s advisers led by National Security Adviser Gen. HR McMaster, to try and work together with President Vladimir Putin on the shape of post-war Syria. They had recommended the drawdown of US troops in the country, following the removal of all foreign forces, especially Iran’s Revolutionary Guards, Hizballah and the various pro-Iranian Shiite militias fighting for the Assad regime.

This approach, our Washington sources reveal, was turned on its head by certain momentous events in the past week, most significantly the arrival of game-changing Iranian weapons to Syria, without a demurral from Moscow. Putin was emerging not as America’s partner in Syria’s future, but the active associate in Tehran’s scheme to establish itself permanently in Syria after the war was over. DEBKAfile’s military sources reveal that Israel’s three air strikes of the al Qutaifa base west of Damascus (not east as widely reported) focused on a single target. US military sources noted later that when an air raid is repeated on the same target, it is evidence of an undivided resolve to wipe it off the face of the earth. The same sources also pointed at Russia’s silence on the Israeli air strike and its consequences, although it was the heaviest Israel has staged in many years.
Trump’s flipflop for keeping US boots where they are in northern Syria (see attached map) puts Syria back in the role of central US arena of contention against Russia and its alliance with Iran and Turkey.
You can find the details of the new US strategy for Syria, its multiple objectives and a prognosis of where it may lead, in the coming issue of DEBKA Weekly 785 (for subscribers) which comes out Friday, Jan. 1.
If you are not yet a subscriber, click here.

78 thoughts on “Trump flipflop: US bases to stay in post-war Syria for blocking Russian-Iranian consolidation”