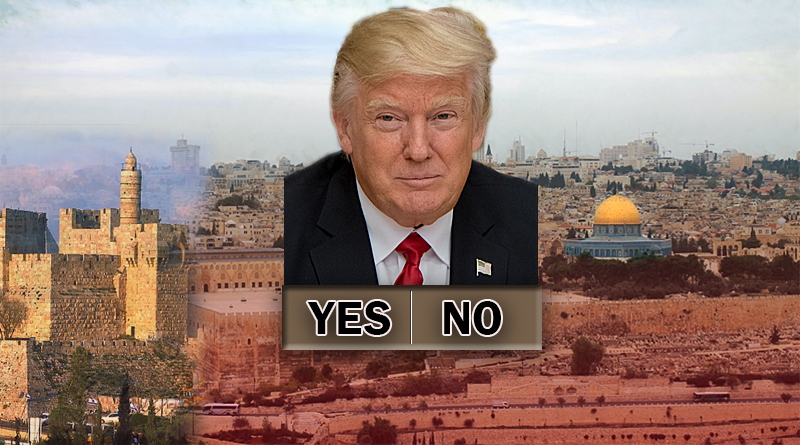 President Donald Trump spoke to Israeli and Palestinian leaders Tuesday amid high suspense for his announcement Wednesday, Dec.6 on the status of Jerusalem.  Palestinian Authority Chairman Mahmoud Abbas said Tuesday that he had been informed by President Trump of his decision to relocate the US embassy from Tel Aviv to Jerusalem.” Abbas spoke after the US president phoned him and Prime Minister Binyamin Netanyahu to prepare the ground for the announcement promised for Wednesday on his decision regarding Jerusalem. Israel’s Transport Minister Yisrael Katz later said that , according to his information, the US president will recognize Jerusalem as Israel’s capital and move the embassy at a later date.
On Monday, Dec. 4, Trump’s intentions were still unclear. The White House said he had not yet reached a decision and it would take another few days. The delay left a legal anomaly. The Jerusalem embassy act of 1995 mandates the relocation of the US embassy from Tel Aviv to Jerusalem – unless the president signs a six-month waiver. No US president has thus far waived the waiver. Trump signed it on June 1 but missed the Dec. 4 deadline, leaving his intentions up in the air. The same 1995 act also called for Jerusalem to “remain an undivided city and for it to be recognized as the capital of the State of Israel.”

Warnings of dire consequences – major unrest, Arab and Muslim anger and an end to the peace process – came from the Middle East as President  Trump pondered a change in Jerusalem’s status. Earlier, Jordan’s Foreign Minister Ayman Safadi warned that his failure to sign the waiver would trigger anger across the Arab and Muslim world. Egypt’s foreign minister Sameh Shouky spoke of a “negative impact” in the region; Turkey’s President Tayyip Erdogan called recognizing Jerusalem a “red line” for Muslims and warned he would sever ties with Israel;  the Palestinians threatened a violent new uprising; and the Saudi ambassador to Washington warned of a “detrimental impact” on the peace process.

Israel’s ambassador to Washington, in an interview to Politico Monday, advised the Palestinians to “Wake up.” Not recognizing Jerusalem as Israel’s capital, he said, is a farce. “Understand that Jerusalem is Israel’s capital. You have to deal with that reality.”

The only solid evidence of a change in store was found by DEBKAfile at the site in southern Jerusalem that was allotted long ago for a US embassy compound. Left derelict and overgrown with weeds for decades, the site was suddenly last week enclosed with a new iron fence.

53 thoughts on “Trump may recognize Jerusalem as Israel’s capital, relocate the US embassy – neither or both”