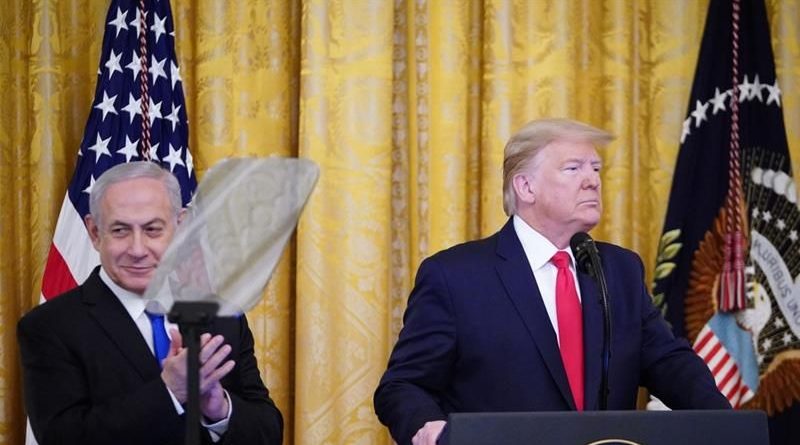 Israel may as of next week annex the Jordan Valley and all 150 Jewish communities in Judea and Samaria, i.e. 30pc of the West Bank, while the Palestinians would have four years to win an independent state and a capital in East Jerusalem.

That is the substance of President Donald Trump’s vision for an Israel-Palestinian peace as he presented it at the White House on Tuesday, Jan. 28, alongside PM Binyamin Netanyahu, in a striking historic event – even for the critics of its content.

The prime minister stated “I agree to negotiate with the Palestinians on the basis of your plan,” because, he said, unlike all previous peace initiatives, this one strikes a “realistic balance” between Israel’s security needs with recognition of Biblical sites as the bedrock of our Jewish heritage, while also understanding and addressing Palestinian aspirations. All previous plans required Israel’s withdrawal from the Jordan Valley, its vital eastern frontier.
Both Trump and Netanyahu welcomed the UAE, Omani and Bahraini ambassadors, who accepted Trump’s information to attend the event, making it hard for Palestinian Authority Mahmoud Abbas to go through with his all-out campaign to derail it with the help of full Arab support. He will also seek Arab League backing for his rejection. The Saudi and Jordanian envoys were absent.
The Trump plan also states:

Trump in his presentation speech stressed there would be no compromise on Israel security and his plan for two states offered no risk to Israel. Addressing the Palestinians, he said this was their last chance for an independent state and a bright future for their youth. Turning to the Arab world, the president said it was their chance to correct the mistake they made in 1948 and start a new chapter with the state of Israel.