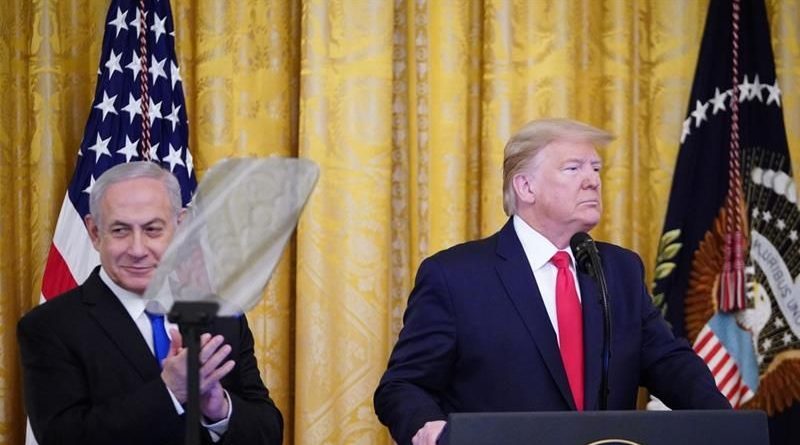 US President Donald Trump’s “Deal of the Century” blueprint for an Israel-Palestinian peace, which saw the light of day on Tuesday, Jan. 28, drew mixed reactions and some dire prophecies that it would never be implemented.

The doomsters are over-simplistic. Regardless of the Trump plan’s prospects of taking off in the near or distant future, its very emergence is highly meaningful in that it relegates to the past the politically correct perceptions and phraseology used widely for generations to characterize the Israel-Palestinian dispute. The Trump blueprint has dropped the demand for painful Israeli concessions as the penalty for “Illegitimate occupation” of Judea and Samaria and compensation for the “Palestinian victims.” The new lexicon switches the onus for resolving the dispute to the Palestinians and a demand to abandon their long rejectionism. If they want a state, they must accept the situation realistically as it is, says the new plan. They must finally recognize Israel’s existence as the state of Israel embodying Jewish nationhood with a right to sovereignty over parts of the West Bank and over Jerusalem, before Palestinian nationhood attains its independent state.

This state stands to gain 70pc of the disputed territory plus land swaps. Israel offers to cede two enclaves in the Negev south of Gaza on the Egyptian border, as well as substantial pockets of land abutting the West Bank. Those pockets, known as the Triangle, are inhabited by 300,000 Israeli Arabs.

While the Trump road map also does away with the cherished Palestinian “right of return” principle for the 1948 war refugees, the Palestinian state would not be prevented from resettling refugees in its new acquisitions.

The fate of this plan depends primarily on the personal future of three individuals:

1. If Trump wins the 2020 US presidential election and remains in office until 2024, he will be able to manage the realization of his vision. If a Democrat attains the White House, he or she will most likely ditch its main elements, in the same way as Trump dumped the 2015 nuclear deal signed by the Obama administration with Iran. The four leading Democratic hopefuls have all trashed their rival’s peace plan. However, as president, each of those Democrats would most likely discard some parts, chiefly Israel’s annexations of settlements, and retain such elements as Palestinian statehood.

2. A larger question mark hangs over the future of Prime Minister Binyamin Netanyahu, who faces a critical election challenge as soon as March 2.

His prospects are more uncertain than those of Donald Trump. As he stood alongside the US president for the joint presentation of their historic peace plan, Israel’s attorney general, Avihai Mendelblit, chose that moment to file three corruption charges against him with the Jerusalem District Court – the first ever against a sitting Israeli prime minister.

His trial for alleged bribery, breach of faith and fraud will most likely open after election day and drag on for months. But meanwhile, the glitter of the White House event was tarnished at home by the cloud hanging over his campaign. If he does win the election, i.e. collects a 61-seat Knesset majority for a ruling coalition under his scepter, Netanyahu will go as fast as he can to implement the Trump blueprint. By law, a prime minister may serve until he is judged guilty by a court of law.

If he loses the election, his main rival Benny Gantz of Kahol Lavan, will have a clear run towards accepting a Palestinian state along the track laid out for him by his predecessor and the US President – without the hassle of a domestic battle with the right. He has already picked up the ball and decided that he, not the prime minister, will present the plan to the Knesset next week. The right-wing parties don’t trust him as a potential prime minister to go through with all parts of the plan – he has already noted that the “international community” must first come aboard. They are therefore pressing for the annexations to go forward without delay before March 2. Palestinian statehood is in any case scheduled to take place in four years after negotiations.

3. The Palestinian Authority chairman, Mahmoud Abbas (Abu Mazen) has rejected the plan with “a thousand noes” and the threat of popular resistance. Next week, he starts making the rounds of international institutions and foreign governments for support. He is, after all, 84 and no one can tell how long he can hold out, but so long as he dominates the Palestinian scene, he won’t let the Trump’s peace vision take off.

At the same time, DEBKA Weekly’s sources point out, the plan was not tailored to suit Abu Mazen, but rather as bait for his successors. A leadership struggle is quietly raging behind the scenes in Ramallah. (A separate article deals with the contenders.). It is more likely than not that US and Israeli intelligence services have tagged the frontrunners and contacted them before President Trump and PM Netanyahu aired the new peace plan.

Furthermore, the $50bn allocation cited by President Trump as an investment by the US and its Gulf allies in the economic development of the Palestinian state would be a colossal bonanza for the Palestinian leader-in-waiting to bolster his rule after Abbas is gone.

This huge investment in an independent Palestine (the exact amount required for Syria’s rehabilitation from a decade of civil war) approved by the Trump administration, Saudi Crown Prince Mohammed Bin Salman and the UAE ruler Prince Mohammed bin Ziyad, is intended to support a wider vision. The hope that a modern, thriving Palestinian state will be a bridge between the Arab world and Israel. That prospect looks rather far-fetched at this moment.