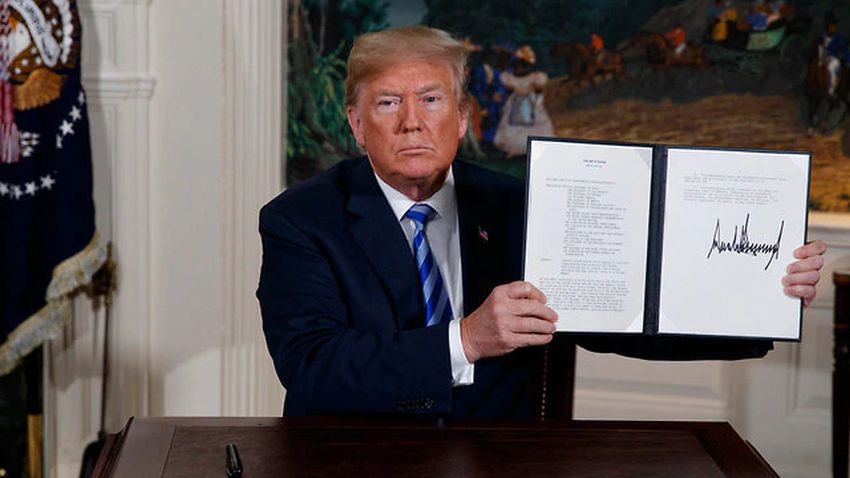 In a tensely-awaited speech Tuesday night, US President Donald Trump took the US out of the 2015 nuclear deal with Iran, and signed memo for new sanctions. He stressed that since the deal was signed, Iran had grown more brazen in the world’s leading sponsor of terror. When it ends, the Iranian nuclear program will be on the brink of breakout. Therefore, the “sunset clause” cannot be allowed to stand. The deal placed no limits on Iran’s malign behavior in Syria, Yemen and the around the world. It failed to protect the world from the “lunacy of a nuclear bomb.” At its heart as the giant fiction that Iran sought a peaceful nuclear program. “Proof that this was a lie was published by Israel which showed that Iran continued to pursue the bomb.”
“That deal was defective at its core and if we do nothing we know what will happen,” said Trump. America will not be held hostage to nuclear blackmail, or allow a regime which says death to America acquire this weapon

“We will be working with our allies to find a lasting solution to the Iran threat, its nuclear ambitions, terrorism and menacing activity across ME. Meantime, sanctions will go into effect so powerful that Iran will have bigger problems than it has ever faced before. President Trump thereupon signed a memorandum for re-imposing “the highest level” of sanctions on the Iranian regime. He also announced that Secretary of State Mike Pompeo was on his way to Korea to set up his summit with Kim Jong-un. Prime Minister Binyamin Netanyahu declared in a special broadcast that President Trump’s courageous actions focused on thee fields: Doing away with the nuclear deal, halting the flow of money to Iran and curbing Iranian aggression, especially in Syria. Turning to the current high war tension between Israel and Iran, he said: “Our army is ready, it is strong, and will deal harshly with any party seeking to harm us.”

14 thoughts on “Trump pulls US out of the Iran nuclear deal, imposes “highest level” of sanctions”