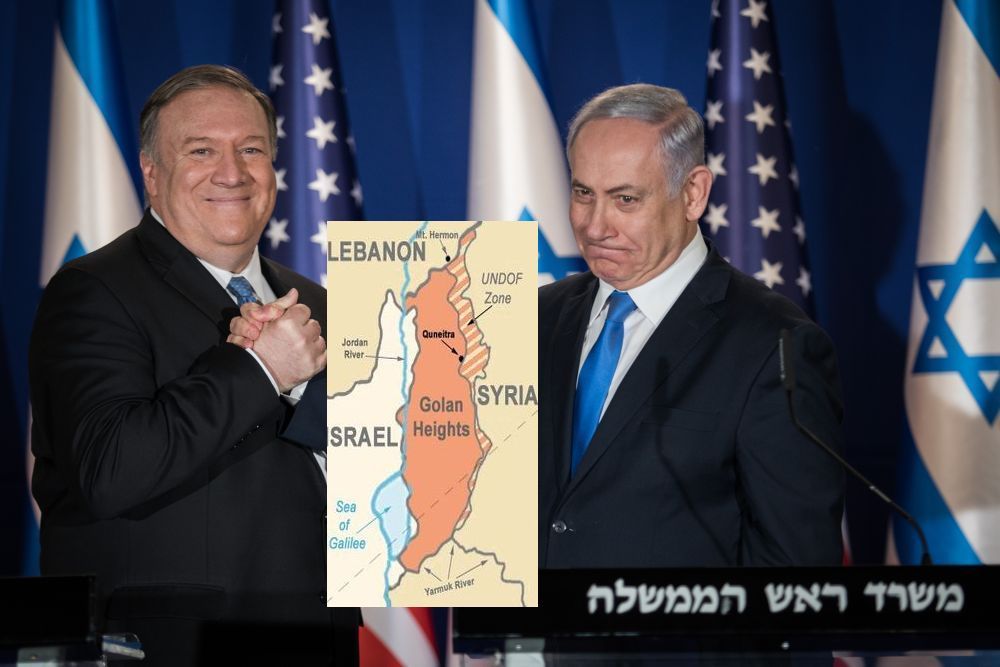 US President Donald Trump’s declared recognition of Israeli sovereignty over the Golan on Thursday, March 21, had a time-sensitive object, unconnected to the Israeli election or Binyamin Netanyahu’s run for reelection, as his rivals contended. DEBKAfile’s military and intelligence sources reveal that it was an arrow aimed by the US president at Iran, Syria, Iraq and Hizballah, and the machinations plotted at Syrian President Bashar Assad’s meeting with Iran’s supreme leader ayatollah Ali Khameini on Feb. 25. Present at their meeting, our sources reveal, were two figures, Al Qods chief Qasem Soleimani, supreme commander of Iran’s Mid East fronts, and, for the first time, a high-ranking Hizballah military official, who is a senior strategic adviser to Hassan Nasrallah.

In answer to a question put to him in an Israel TV interview on Thursday, visiting Secretary of State Mike Pompeo pointed out that Qassem Soleimani doesn’t’ consider elections in Israel when he acts day by day against the US and Israel. Pompeo was referring that groundbreaking conversation in Khamenei’s office on Feb. 25. The presence of a highly representative Hizballah official at that meeting, alongside Assad and Soleimani, signified Tehran’s decision to treat Syria and Lebanon as a single political and military entity.

Iran in fact is taking the first steps towards Syria’s annexation of Lebanon.

Neither Washington nor Moscow are ready to countenance this step. It is therefore possible that President Vladimir Putin may agree to overtly join or quietly support US and Israel counter-action.

He already sent Defense Minister Gen. Sergei Shoigu to Damascus on Tuesday, March 19, the day after the Iranian, Syrian and Iraqi chiefs of staffs sat down to prepare joint operations in line with their new orders. Shoigu warned Assad against going through with the plan to join Iran, Iraq and Hizballah in a new axis non-aligned with any world powers. Shoigu told him that Russia was ready to put a stop to it taking off.

The Trump administration is setting two steps in train:

US recognition of Israeli sovereignty in the Golan, though important, does not mark the end of the struggle for this strategic plateau; just the beginning.