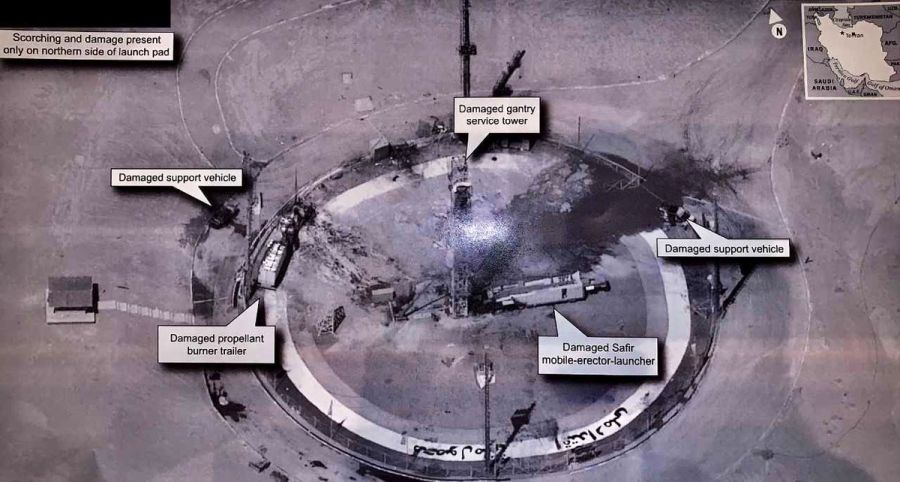 The US President Donald Trump denied any involvement in an explosion during Iran’s preparations for launching a space satellite on Thursday, Aug. 29.  He tweeted on Friday that the US “was not involved in the catastrophic accident during launch preparations for the Safir,” adding, “I wish Iran best wishes and good luck in determining what happened.”

Iran’s state media and officials did not immediately acknowledge the incident. However, satellite images showed the rocket exploding on the launchpad at Imam Khomeini Space Center, 240km south of Tehran.  A black plume of smoke rose above what looked like the charred remains of a rocket and its launch stand.
It was Iran’s third failed satellite launch this year. Images of the space center suggested that the rocket either exploded during ignition or possibly briefly lifted off before crashing back down on the pad.

DEBKAfile reports: Safir was designed to place in orbit a Nahid-1 communications satellite. The US president’s extraordinary action in denying any involvement in the explosion, a denial that implicitly covers sabotage by a cyberattack, raises questions about the cause of the “catastrophic accident.” Trump may be assumed to know the answer. His use of the adjective “catastrophic” suggests that there were casualties, including Iran scientists

The United States has been concerned that the technology Iran uses to put satellites in orbit would help Tehran develop ballistic missiles capable of carrying nuclear warheads. Tehran has denied the accusation that its space program is a cover for ballistic missile development.