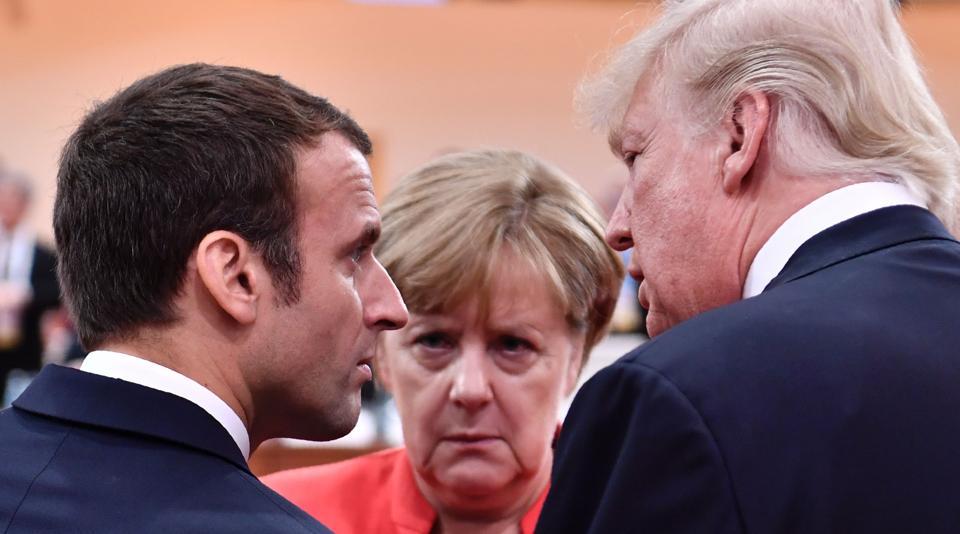 The French president, the German Chancellor and the Iranian Foreign minister are present in the US this week, all bent on saving the 2015 nuclear accord. French President Emmanuel Macron begins a state visit to Washington Monday, April 23; German Chancellor Angela Merkel is due on Friday, while Iranian foreign minister Javad Mohammed Zarif is spending the week in New York. The two European leaders will try and persuade the US president not to quit the nuclear accord, while the Iranian foreign minister is already playing hard ball through the US media.
In a word, indirect negotiations were launched this week on the future of the 2015 nuclear accord with Iran.
For an exclusive take on this unfolding story, subscribe to the coming issue of DEBKA Weekly out on Friday, April 20.
DEBKAfile’s sources report that these under-the-table negotiations are not restricted to the nuclear issue, but also touch on Iran’s interests in Syria. A month or more before his summit with North Korea’s Kim Jong-un, US President Donald Trump has therefore set his feet on a negotiating track with supreme leader Ayatollah Ali Khamenei, channeling it through the two European leaders and the Iranian foreign minister.

Our sources reveal that working papers were prepared for the US-European summit in Washington by a team of US, French, German and British diplomats. They are to be the agreed guidelines for a new common Western policy line on Iran, on which the four allies were hitherto at odds. The paper has four parts:

In his interviews to the US media, Foreign Minister Zarif played Iran’s opening gambits for the bargaining process. His diplomatic style is typically offensive rather than defensive. Tehran would not stand for any amendments being inserted in the original nuclear accord text, he said, and warned that his country would resume its nuclear program “at much greater speed,” if Trump withholds the next round of Iran sanctions waivers due for renewal on May 12, effectively taking the US out of the accord. Zarif also insisted that staying in the accord was not enough. The US must lift the sanctions strangling the Iranian economy. He also dismissed as “misguided” French and German efforts to pressure Tehran into curtailing its regional policies and missile program in exchange for Washington staying in the deal.

It may be understood from these points that Tehran won’t object to Hizballah forces exiting Syria – but Iran is there to stay.

Prime Minister Binyamin Netanyahu and Defense Minister Avigdor Lieberman referred to Iran’s latest war threats against Israel in a toast to Israel’s 70th anniversary on Sunday, April 22, at the IDF high command. Netanyahu addressed Zarif as “the foreign minister of a nation that sends armed UAVs against Israel and ballistic missiles against Saudi Arabia.” He said: “I listened to his diplomatic language and noticed the huge gap between his words and the deeds of the Revolutionary Guards, who are deploying an army for the explicit goal of destroying Israel.”

However, the upshot of these events is that Iran, whose motives are malign, is an active participant in talks that affect the future of Syria, while Israel has no role in the process.

President Macron is close to the Israeli position on Syria: He reiterates his opposition to President Trump’s determination to pull US troops out of Syria, because, he says, that “will leave the floor,” to Iran, as well as ISIS and Bashar Assad. Israel is taking no part in this argument, although the US troop withdrawal would leave its borders dangerously exposed to its arch-enemy, Iran.
Trump, for his part, is indirectly keeping the ball rolling with Tehran, while juxtaposing it with his forthcoming face to face with Kim Jong-un in May or June. He appears to calculate that if Kim agrees to US troops remaining in South Korea as part of a denuclearization deal, then Iran would appreciate that the US withdrawal from Syria is a very big concession indeed, for which Tehran ought to pay a high price.

DEBKAfile’s sources predict that Trump will come to terms with Macron and Merkel on both items at issue between them. They will find a compromise for preserving the nuclear deal with Iran and a formula on the US troop question in Syria. This formula appears to consist of taking US military strength out of Syria but remaining “beyond the horizon.”
Netanyahu and Lieberman must therefore contend first with the fallout from the US troops’ exit from Syria, before confronting Iran’s long-term presence just across its northern border.