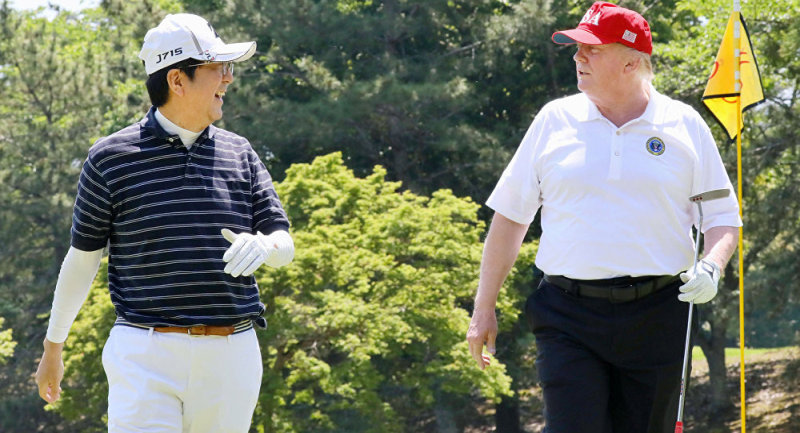 In between swiping golf balls in Tokyo, it was agreed between President Donald Trump and Prime Minister Shinzo Abe on Sunday, May 26, that the Japanese premier would set out for Tehran without delay for an attempt to cut through the high tension between the United States and Iran. The Japanese leader joins a growing line of would-be peace brokers knocking on Tehran’s door. None have come up with results, except for encouraging the Iranian regime to believe it can safely maneuver its way out of the crisis without giving an inch.

Trump’s intent to resolve the dispute by face-to-face talks with supreme leader Ayatollah Ali Khamenei – on the lines of his summits with Russia’s Vladimir Putin, North Korea’s Kim Jong un and China’s Xi Jinping – is seen in Tehran as a sign of weakness which can be exploited.

Trump may look naïve, but by going directly to the top man for resolving disputes could work, provided only that his opposite number shares his will to reach a consensus. However, without common ground in the first place, all the smiles, handshakes, hugs and mutual compliments in the world lead nowhere. Fresh fareups, even more injurious, may well follow.

Since mid-May, President Trump has held confidently that the tough sanctions he clamped down on the Islamic regime and Pyongyang will ultimately yield the desired results and so military action is not called for – even if it is indirect. He has discounted as background noise North Korea’s short- and medium-range missile tests, as well as Iran’s bloodless sabotage attacks on oil targets in the Gulf and the rocket fire near the US embassy in Baghdad. Trump decided that none of those minor acts of aggression were dangerous; and, therefore, did not call for a proactive response from Washington. And so, when the Pentagon asked for 10,000 extra troops for deployment in the Middle East in view of the threat posed from Tehran, the White House approved a fraction of this figure, 1,500 – which he further qualified by stating they were only “protective and some very talented people…” This was meant to assure the Iranians that the Americans were not about to attack them.

In Japan, he publicly contradicted his national security adviser John Bolton by saying that he was not “personally bothered by the North Korean tests… My people think it could have been a violation,” he said. “I view it differently.” He then tweeted: “North Korea fired off some small weapons, which disturbed some of my people, but not me.”

Trump even publicly disagreed with his host, the Japanese prime minister, during a joint press conference. When asked about those North Korean tests, he said he was “very happy with the way it’s going.”

Our sources point out that the Japanese people are seriously concerned by the resumption of North Korean missile tests, recalling the ballistic missiles that flew over their heads in the past. Trump’s playdown of the threat is damaging to Abe’s standing at home after he made a supreme effort to demonstrate his trust in and friendship with the visiting US president. His neighbor, China’s Xi is holding back on the friendly attitude he demonstrated in the first two years of the Trump presidency, but Abe is constrained by Tokyo’s dependence on Washington’s military support.

In this context, too, Saudi Arabia and the United Arab Emirates are beginning to pull away from Washington, deeply resentful of Trump’s unwillingness to hit back for Iran’s attacks on their oil facilities. Trump and State Department Secretary Mike Pompeo have done their best to paper over the cracks in this alliance by approving huge arms sales worth $8.5 billion. But what Riyadh and Abu Dhabi really want is not so much a supply of expensive weapons but a US policy of active deterrence against Tehran’s belligerence. For now, Donald Trump shows no sign of meeting the expectations of America’s Gulf allies.