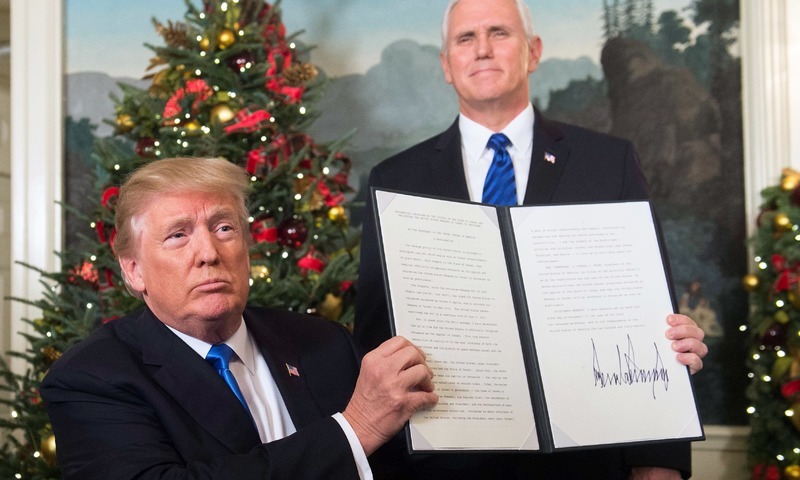 US President Donald Trump’s deliberate departure from the course of his predecessors by recognizing Jerusalem as the capital of the state of Israel is a game changer on two levels: the Israel-Palestinian dimension and the US-Arab-Israeli alignment in the Middle East against Iran.

Trump showed great courage when he treated with contempt the attempts to intimidate him against taking a step he believed to be right. He was not put off by threats of a new Middle East war from every corner of the Arab and Muslim world or the frowns of disapproval from US allies in West Europe. By recognizing Jerusalem as Israel’s capital he swept away the outdated international status conferred by the 1947 partition of Palestine, which Jordan overrode with its 19-year annexation of the Old City, and brought it in line with its real situation in modern times.

Trump acted with the same respect for reality as his predecessor George W. Bush. In a letter to then Prime Minister Ariel Sharon, Bush recognized the presence of West Bank settlement blocs and their expansion over the years in keeping with demographic changes; and the absence of a peace process with the Palestinians so long as their extremist terrorist movements were not eradicated. Bush’s guiding principle was that facts on the ground called for a realistic appraisal, a principle later discarded by President Barack Obama and his secretaries of state Hillary Clinton and John Kerry in their failed excursions as peace brokers.

Trump’s phraseology reveals that his approach is fully rooted for the first time in the reality of Jerusalem as Israel’s working capital in every respect: “Today, Jerusalem is the seat of the modern Israeli government,” he said Wednesday. “It is the home of the Israeli parliament, as well as the supreme court. It is the location of the residence of the prime minister and the president. It is the headquarters of many government ministries. For decades visiting American presidents, secretaries of state and military leaders have met their Israeli counterparts in Jerusalem, as I did on my trip to Israeli earlier this year. Jerusalem is not just the heart of three great religions, but it is also the heart of one of the most successful democracies in the world.”

But the president also took care to leave open the “specific boundaries of Israeli sovereignty in Jerusalem or the resolution of contested borders” for negotiations between the parties. Neither did he state that the end goal was two states, only that he would support this solution “if agreed to by both sides.”

Most of all, he emphasized that his decision on Jerusalem was in no way a departure from his commitment to achieve a peace agreement, i.e., “a great deal for Israel and a great deal for the Palestinians.”

Trump’s guiding principles have therefore been laid out for himself and his son-in-law Jared Kushner in their pursuit of a peace accord to open the door for full recognition of Israel by the Arab world, led by Saudi Arabia, the United Arab Emirates and other Gulf nations – all based on reality on the ground.

There is no question that this policy is tilted towards Israel by a US president who is more pro-Israeli than his Republican predecessors Ronald Reagan and Bush in the White House.

But Palestinians see the strategy they pursued for 24 years – since the 1993 peace framework accords were signed in Oslo – in shambles.

That strategy was built around international pressure to force Israel to concede to the Palestinians on their political and territorial claims. Their threat now to mobilize the entire world against Trump and the United States, holding up the certainty of violence by extremist groups, is an empty one for a simple reason: The Arab world’s leaders, who once spearheaded wars against the Jewish state in support of the Palestinian cause, are at present divided against it. Saudi Arabia, the United Arab Emirates and Egypt, however they may inveigh against Trump’s announcement in public, are now lined up behind him and at one with the need to further develop their strategic ties with Israel – especially against their common enemy, Iran.

If those three leaders stick to this alignment after Trump’s landmark decision on Jerusalem’s status, the Palestinians will be forced to fall back on one of three options:

It must be said that the groupings cited in options 2 and 3 are still unformed and may never mature, whereas the US-Arab lineup is already going strong.