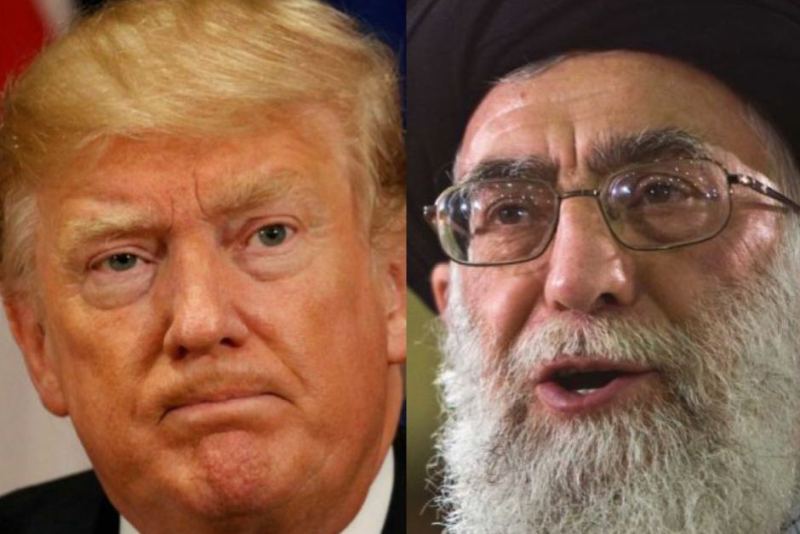 President Donald Trump’s clampdown of “hard-hitting” sanctions on supreme leader Ayatollah Ali Khamenei and his close circle on Monday, June 24, was on the face of it the ultimate step for separating the all-powerful ruler from his vast, hidden fortune and so clipping his wings.

However, although it had a powerful propaganda impact, DEBKA Weekly’s Iranian sources question its practical value. Khamenei’s office, situated in a well-fortified separate compound in northern Tehran, is nothing like the executive bureau of any other ruler in the world in structure or the means at its command. From his office, the supreme leader runs a number of private militias and an intelligence agency, which answer directly to him and no other branch of government. The ayatollah and heads of bodies sitting in his office run a private financial system and budget, independent of the regular government system, or even the Revolutionary Guards Corps (IRGC) economic empire. Western intelligence estimates of Khamenei’s private fortune run to tens of billions of dollars, which are deposited in secret, deeply buried accounts in many countries.

Laying hands on the autonomous treasury buttressing Ayatollah Khamenei’s omnipotent rule must counts as an epic feat for US intelligence, likely aided by the Israeli Mossad and Iranian expats. The codes of access to these secret nest eggs are assuredly Iran’s most closely guarded national secret. US sanctions agents, however efficient, are unlikely to have reached them all; the bulk of the money is secreted in hundreds, if not thousands, of accounts in the names of Shiite Muslims residing abroad and holding foreign citizenships, who run straw companies for transacting business through local banks or international banking systems. Some of these deposit-holders may have no idea that the money belongs to Iran’s supreme leader. All they are asked to do is to obey anonymous callers who periodically direct them to use pre-supplied codes to move money.

Even if the US sanctions against the ayatollah’s private funds prove to be watertight, which is unlikely, Khamenei could still dip into the IRGC’s sprawling business enterprises for procuring funds. With this in mind, the US Treasury accompanied the president’s action against Khamenei with parallel sanctions against another eight IRGC commanders, even though all of IRGC’s capital is held in Iran, China or Russia and therefore out of Washington’s reach.

Although the cutoff of Khamenei’s funds may be less than total, Trump’s affront to the supreme leader of Shiite Revolutionary Iran was personalized and earthshattering. Payback is almost inevitable. An examination of the vast extent of Khamenei’s powers reveals the scale of its impact on the Islamic regime.

His formal title as The Supreme Leadership Authority makes Ayatollah Ali Khamenei the highest ranking religious and political leader of Iran and its Head of State. The Constitution of the Islamic Republic of Iran established this post for Ayatollah Ruhollah Khomeini after the 1979 Shiite Revolution which he led.The supreme leader’s powers transcend that of a head of state and head of government and are combined with his function as head of the religious clergy. They include the authority to appoint senior officials in government, the military and judiciary. This unique post was initially reserved for the highest- ranking cleric and scholar of religious law, but in 1989, upon the death of the founder, the constitution was amended to allow Ali Khamenei, who never made his mark as a religious scholar, to succeed Khomeini.

Eleven functions listed in the Constitution provide the supreme leader with unparalleled authority:

• Publication of decrees for popular referendums

• Command of the armed forces

• Declarations of peace or war and military movements

• Authority to appoint, dismiss or accept the resignation of religious scholars of the Assembly of Experts which elects the Supreme leader

• Head of the judiciary

• Head of television and radio networks

• Head of the joint military staffs

• Commander of the Revolutionary Guards Corps

• Supreme Commander of all armed forces

DEBKA Weekly’s sources stress that Trump’s sanctions for Ali Khamenei are tantamount to an assault on the legitimacy not just of Iran’s supreme leader but of its Islamic Revolution. It is the ultimate act of disrespect for the highest authority and symbol of revolutionary Iran and will certainly bring forth an extreme response up to and including open war.

If President Trump hoped by this far-reaching step to bring Iran to the table, he achieved the opposite effect in the near term. On Tuesday, Iran’s Foreign Ministry spokesman Abbas Mousavi said the sanctions meant the “permanent closure of the road of diplomacy” with the United States. The back channel, along which US-Iranian dialogue took place in Bagdad, with Swiss and Iraqi mediators, is therefore dead. On Wednesday, the supreme leader weighed in on his website: Calling the United States “the world’s most vicious regime,” he derided the Trump administration’s calls for negotiations as reflecting its failure to achieve its goals through pressure. “They said, ‘Negotiate with us in order to progress.’ Yes!” said the ayatollah. “We do progress but without you. Negotiations are their way of deceiving” Iran to get what Washington wants, he added. “If you surrender to them, you’re done!”