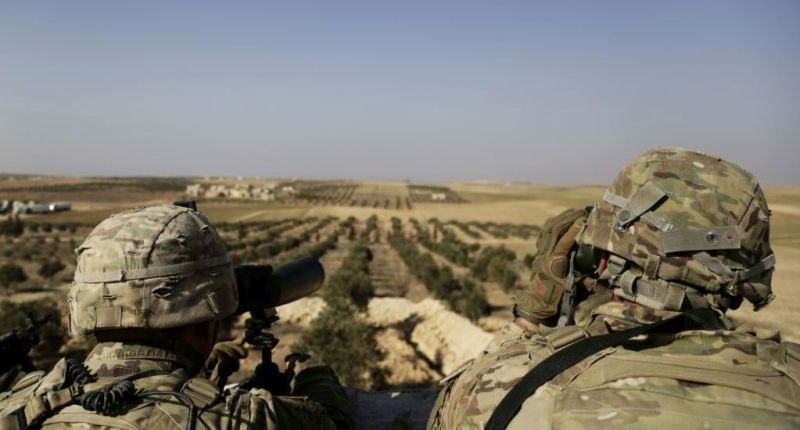 Prime Minister Binyamin Netanyahu was in for a surprise when he sat down with President Donald Trump at the White House on Monday, March 5. He found the president had jumped the gun on him. Netanyahu had planned to ask the president to retain – and even ramp up – the US troop presence in eastern and northern Syria, especially on the east bank of the River Euphrates, as a bulwark against Iran’s buildup of a permanent military presence in Syria. Reinforcements had become necessary because the Kurdish YPG commandos serving with the American army in those regions, were going AWOL and making tracks west for Afrin in northern Syria to help their brothers repel the Turkish invasion.

But before he could present this case, Netanyahu found Trump laying before him a detailed US plan for blocking the Syrian-Iraqi border against Iranian Al Qods chief, Gen. Qassem Soleimani’s designs. The Iranian general was on the point of pumping large numbers of Iraqi Shiite militiamen into Syria and opening the border for two-way traffic, a project which had gained Moscow’s backing.

Neither the president nor the prime minister doubted that Soleimani, the commander of Iran’s Middle East military operations, would find a way to weasel around the American barrier. But this would require time and he would be stalled for some months.

DEBKA Weekly’s military and intelligence sources have obtained exclusive access to the six-point Trump plan put before the Israeli prime minister, which is revealed here for the first time:

to double their surveillance flights over the 1,000-km long Syrian-Iraqi border. This directive was addressed to the command centers at the Al Udeid Air Base in Qatar, the USS Theodore Roosevelt “Big Stick” aircraft carrier, which is cruising in the Arabian Sea and the combat helicopters berthed in the Kurdish cantons of northern Syria. They were ordered expressly to strike forthwith, without checking first with Washington, upon receipt from aerial reconnaissance or intelligence data confirming that military forces were attempting to cross the Euphrates from west to east or trying to cross into Syria from Iraq. By this directive, the US has created an effective no-fly zone in eastern Syria along the full length of its border with Iraq.

Bucked up by Trump’s disclosure, Netanyahu was able to declare with heightened confidence in a speech the next day to the annual conference of the Israeli lobby, the American Israeli Public Affairs Committee (AIPAC), that Iran is “also seeking to develop, to build precision guided missile factories in Syria and Lebanon against Israel. I will not let that happen. We will not let that happen. We must stop Iran. We will stop Iran.”

DEBKA Weekly’s military and intelligence sources this week noted that Gen. Soleimani had taken his first step in response to the new US strategy. He has doubled the number of military transport planes flying in from Iran to Syrian air bases. At the same time, there have been no Israel air strikes against Iranian targets in Syria for nearly a month. The last one was on Feb. 10. They may be expected to restart quite soon.