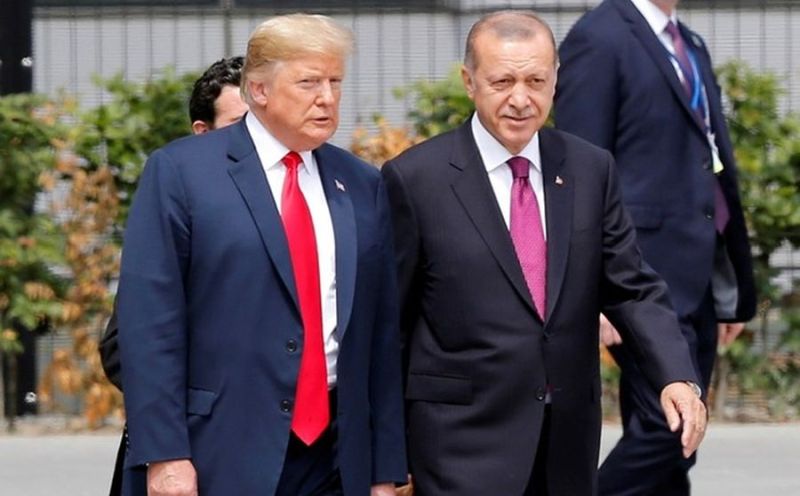 Laying the ground for US President Donald Trump’s shock decision to pull US troops out of north and east Syria, was a live wire. His adviser on Syria, James Jeffrey, had been flitting in and out of Ankara for the past two months, under the Middle East radar, to tie up the ends of a secret deal with Turkish President Tayyip Erdogan. His movements were observed by US Defense Secretary James Mattis and Secretary of State Mike Pompeo. But they were certain that Jeffrey was fleshing out the plan to carve out a US enclave of influence in northeastern Syria and secure it with a semi-autonomous Kurdish-led state entity.Turkey was to be allowed to expand its military control alongside the enclave (as DEBKA Weekly 826 reported on Nov. 30: US Marks out Area of Influence in NW Syria, Anchored in New Kurdish-led Political Entity and Army).

As far as Mattis and Pompeo were concerned, this US-Turkish-Kurdish alignment was designed to be a barrier against the Russian-Iranian-Syrian push in Syria, with support from friendly Arab Gulf states and Israel.

Jeffrey, arguably the only American whom Erdogan trusts and calls a friend, often contended, even before his White House appointment, that US-Turkish relations are the key to stability in Syria and marred only by Turkey’s unqualified hostility to Kurds, especially the Syrian factions. The panacea he proposed was not to tone down Erdogan’s hostility, but to persuade Syrian Kurds to break off ties with their brothers of the Turkish PKK (Kurdish Workers Party) underground movement, which Ankara designates a terrorist organization, and build relations of trust with Ankara. Washington could then mend its ties with Ankara and restore Turkey to the role of a trustworthy ally ready to break away from Russia and Iran.

This doctrine was adopted as their policy guidelines for Syria and US-Turkish ties.

by the Pentagon, the State Department, the National Security Council, US intelligence agencies and a row of bodies involved in US policy making.

But Trump’s sudden decision to pull US troops from Syria forthwith revealed that this doctrine had been no more than a front for a completely different agenda, which had been developed covertly by the president’s adviser on Syria with his approval. Behind this façade, the White House had taken steps that led up to the Trump bombshell announcement. DEBKA Weekly’s intelligence sources count those steps:

1. On Oct. 12, Ankara suddenly released the American pastor Andrew Brunson. This was said to have been part of a secret deal between Ankara and Washington to lift the sanctions that would have sunk the Turkish lira and extradite the Turkish opposition cleric Fethullah Gulen, whom Erdogan accused of masterminding the failed 2016 coup against him. Those reports were strenuously denied by President Trump.

2. Quiet negotiations took place to dissuade Turkey from executing a $2.5bn transaction for the purchase of Russian S-400 air defense systems. Their acquisition would have led to the integration of the air defense forces of a NATO member with parallel Russian outfits in Syria and Crimea, and becoming part of Russia’s eastern Mediterranean and the Black Sea deployments. As recently as Dec. 1, Turkish Foreign Minister Mevlut Cavusoglu stated: “S-400 is a done deal. We have already finalized this deal and will buy S-400s form Russian without any question. In the last 10 years, we tried to buy

from our American friends, I mean the Patriots, but it didn’t work… We have an urgent need and that’s why we bought S-400.”

According to our sources, that statement was part of the charade staged by Jeffrey. The mask came off on Dec. 18 when the US State Department approved a possible $3.5 billion sale of Patriot air and missile defense systems to Turkey after notifying Congress of the certification.

The Kremlin spokesman Dmitry Peskov hurriedly remarked that the American deal did not cancel Turkey’s purchase of S-400s. But, say our sources, he is wrong. Erdogan promised Jeffrey that he would call off the deal with Moscow if he were assured of American air defense systems as well as advanced F-35 stealth planes for his air force.

3. Another part of the charade was the US announcement that its military had established three observation posts in northern Syria for preventing clashes between Turkish forces and the US-backed Kurdish militia. Erdogan was said to be strongly opposed to this plan. That too was a piece of deception. On the quiet, without the knowledge of Secretary Mattis or US military chiefs in Syria, Erdogan had consented to the plan, while the Americans assured the Kurds that the observation posts would keep them safe against the Turkish military concentrations they saw building up in northern Syria for a leap across the Euphrates to the east.

4. DEBKA Weekly’s source can reveal now that these steps are coming together as a masquerade staged to conceal the crux of the deal Jeffrey struck with Erdogan. Under that deal, it was agreed that the US army would evacuate all 12 bases in the Kurdish regions of northern Syria; Turkish forces would then cross over into East Euphrates, march up to the Syrian Kurds’ capital of Qamishli and under its guns force Kurdish leaders to sign a political and military pact with Turkey. This pact would affirm Turkey’s control of Syria’s entire northern region from the Mediterranean coast in the west up to the Iraqi border in the east, in place of the US army.

5. Our sources report that President Trump additionally promised Erdogan that he will conduct a thorough inquiry into the charges brought against the exiled Turkish cleric with a view to eventually extraditing him to Turkey. Erdogan turns out to be the sole winner of the deal Jeffrey negotiated on behalf of President Trump. It resulted in the cataclysmic US military withdrawal from Syria with disastrous fallout on US allies, while the Turkish leader achieved his goals without granting a single discernible concession in return.