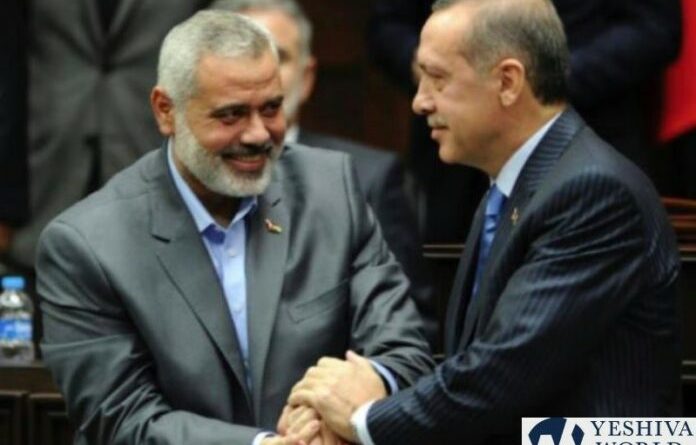 Turkish President Recep Erdogan received Hamas leader Ismail Haniyeh in Istanbul on Saturday, Aug. 22, at the end of a week in which 15 Palestinian rockets and hundreds of dangerous balloons were launched into Israel from the Gaza Strip. Also present were Turkish MIT intelligence chief Hakan Fidan and Hanyeh’s deputy Saleh al-Arour, who has a $5 million US government bounty on his head,

Erdogan, who frequently lambasts Israel, has actively embraced the most radical Palestinian groups, especially Hamas, a branch of the Muslim Brotherhood which Ankara harbors. After the Turkish president vowed to “liberate” Jerusalem from its “invaders,” Israel’s defense authorities elevated his country to a place not far from Iran’s in its national security plans.

DEBKAfile has reported that Hamas has long been allowed to maintain in Istanbul a large network of high-ranking operatives and a staff of 60 for plotting, orchestrating and funding terrorist attacks in the West Bank and Jerusalem by its sleeper cells.

Most recently, the London Telegraph discovered that the Turkish government had gone one better and provided a dozen Istanbul-based top Hamas brass with Turkish passports, granting them freedom of travel, eventually also to countries where Hamas is proscribed as a terror group. This may include European nations where Hamas attacks on Israeli targets are a realistic threat.

Such fears were exacerbated by Hamas’ operational ties to Iran’s Lebanese terrorist pawn, Hizballah, which has made its training facilities in Lebanon available for Hamas recruits, our sources report. Most of the new “Turkish citizens” are convicted terrorists and murderers released and deported from Israel under the 2011 Shalit Deal, in which 1,027 mostly Palestinian prisoners were set free in exchange for an Israeli soldier.

Among those understood to have received the precious passports are  Zacharia Najib, who oversaw a plot to assassinate the mayor of Jerusalem and other Israeli public figures and the notorious Jihad Ya’amor and Hisham Hijaz, as well as Abdel Rahman Ghanimat, who led the Hamas squad responsible for a series of suicide bombings, including a 1997 attack on the Café Apropo in Tel Aviv which killed three young women.

Kamal Awad, a Hamas financier recently sanctioned by the US Treasury, also recently moved to Istanbul. In 2015, Ankara asked Arouri, the most senior Hamas figure outside Gaza, to leave, so as not to embarrass Erdogan then trying to mend relations with Israel.. Arouri now divides his time between Turkey and Lebanon.