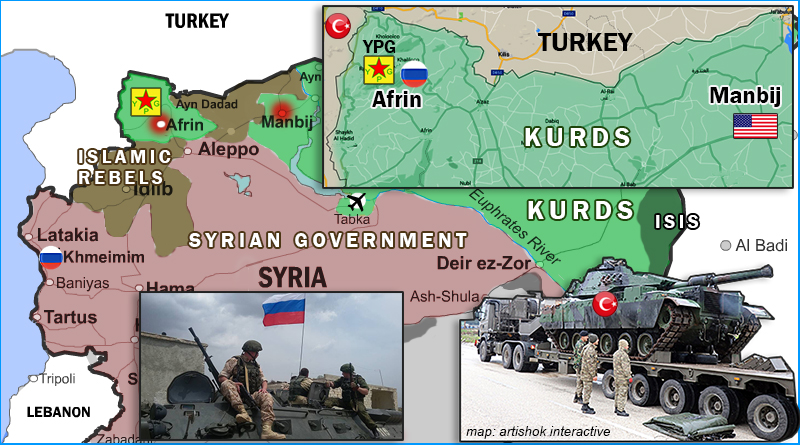 Russian and American army chiefs conferred urgently Saturday, Jan. 20, about Turkey’s escalating assault on Kurdish Afrin in N. Syria. For the first time in the Syrian civil war, Bashar Assad told his army to let Kurdish reinforcements pass through the main highway from Hasakah and the Aleppo region to come to the aid of the beleaguered Kurdish YPG militia in the northern enclave of Afrin against a threatened Turkish invasion. Turkish attacks escalated to air strikes on Saturday from cross-border shelling Friday. President Tayyip Erdogan’s assault on Afrin was the subject of an urgent phone call from Russian Chief of Staff Gen. Valery Gerasimov to the Chairman of the US Chiefs Gen. Joseph Dunford. DEBKAfile reports that they discussed coordinating US and Russian air force conduct over northern Syria after Turkey’s Prime Minister Binali Yildirim ratcheted up the crisis by report the air strikes and saying, “The destruction of the YPG and PKK has begun.”
Read DEBKAfile’s earlier analysis of how the Afrin confrontation began.
Turkish artillery shelling Friday, Jan. 19 kicked off a major offensive against the Kurdish Afrin enclave of N. Syria, shortly after the Turkish C-of-S and intelligence chief left Moscow. No statement followed the visit as to whether Gen. Hulusi Akar had succeeded in his mission of winning Moscow’s cooperation. What happened next was word that the Russian troops positioned in Afrin were to be moved out of the targeted region for safety.

Three days earlier, on Jan. 16, Gen. Akar, who leads one of NATO’s largest armies, visited Brussels and asked the Chairman of the US Joint Chiefs Gen. Joseph Dunford, not to counter the planned Turkish invasion for “clearing YPG [Kurdish militia] fighters from Afrin.” But he was cautioned by the American general against going forward with this offensive. In Ankara, President Tayyip Erdogan shot back by informing parliament in Ankara that the Turkish military operation against the Kurds of Afrin was “imminent.” For Erdogan, relations with Washington, which supports the Syrian Kurds, had reached breaking point.

Moscow’s decision to move the Russian contingent at the airport of Afrin out of the way of crossfire, 10 months after its deployment there, was a sign that the Kremlin is taking seriously Erdogan’s threat to crush the Kurds of Afrin. The Turkish ruler has stepped up his anti-Kurd rhetoric even more since US plans were revealed for creating a 30,000-strong border army, predominantly made up of Kurdish militias, in northern Syria. The Kurdish YPG has meanwhile warned the Turks and the Syrian rebel force they support: “If they dare to attack, we are ready to bury them one by one in Afrin.”

But Turkish Defense Minister Nurettin Canikli left no room for doubt that the die has been cast, when he said Friday in Ankara: “The assault has begun, the operation has actually started de facto with cross-border shelling. I don’t want it to be misunderstood. All terror networks and elements in northern Syria will be eliminated.”

DEBKAfile’s military sources note that the Turkish army must overcome four obstacles before its tanks and troops can roll across the border into Afrin.