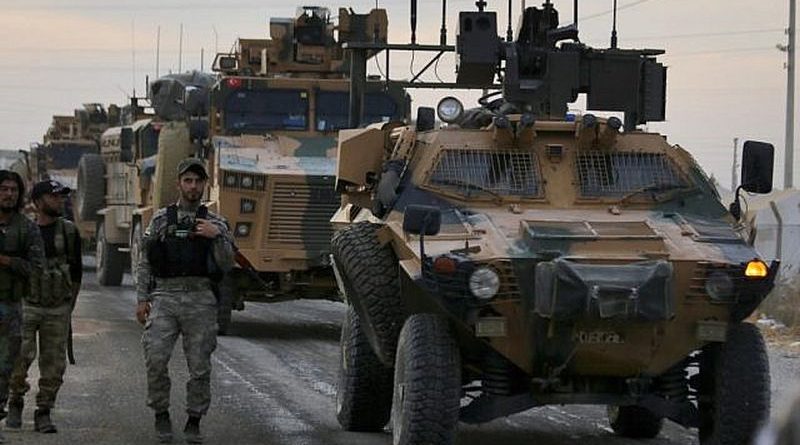 Turkey’s drive to dominate the Mediterranean went into high gear in a major clash on Monday, Feb. 3, in the northern Syrian province of Idlib, in which at least eight Turkish soldiers and contractors were killed, as well 76 Syrian troops, according to Turkish Defense Minister Huluski Akar. The UN reported that a mass exodus of refugees from the province continued.

Turkish President Recep Erdogan shows no sign of backing away from his claim to dominate northern Syria. Indeed, on Tuesday, he declared that he would not allow Syrian government forces “to gain additional territory in Idlib,” which is the last remaining province left in rebel hands.

Neither he nor his defense minister mentioned the aerial shield Russia has drawn over Syrian government forces as a hands-off warning to Turkey to stop its air and artillery attacks on Assad regime forces or else face Russian might.

The Turkish president is revving up his military operations on two fronts – Syria and Libya – regardless of mounting resistance. “Those who think they can test Turkey’s resolve with these types of treacherous attacks will come to understand that they have made a big mistake,” Erdogan boasted before embarking on a trip to Ukraine. “We are determined to continue the operations we have undertaken for the security of our nation, our people and our brothers in Idlib.”

As for the embattled Libyan capital of Tripoli, Turkey and Russia, ranged on opposite sides of the conflict, are pouring strength and hardware onto this front. They are gearing up for the critical battle for the city, after the Jan. 12 ceasefire unraveled and a Berlin summit failed to stop the fighting and curtail foreign interference.

Last week, two Turkish warships appeared off the Libyan coast, as Ankara continued to send some 6,000 Syrian mercenaries to support the Tripoli-based Government of National Accord (GNA), along with air defense and jamming systems. Qatar has lined up with Turkey behind the GNA. They are up against the all-out assault launched by Benghazi-based Gen. Khalifa Haftar’s Libyan National Army (LNA) last April to seize the capital from the GNA with backing from Russia, Egypt and the UAE.

Russia has flown from Syria to the Tripoli front more Wagner Group mercenaries to augment the 2,000 already serving Haftar in Libya.

Shot down last week was the first Emirati drone to appear off the Libyan coast since the failed ceasefire. Its appearance underlined the UAE’s commitment to beat down Turkish intervention with the air force units as well as the heavy artillery standing ready for the big showdown to begin.

The US has stepped aside from the Tripoli contest. US Africa Command Chief Gen. Stephen Townsend said in a statement that Libya faces significant escalation. The interjection of troops from external actors like Turkey and Russia, he said, had left the international community paralyzed. A US Marine detachment left Libya last year with the onset of the Haftar offensive. The Pentagon plans a further drawdown of the 6,000 troops deployed across Africa, substantially shrinking the US foothold on that continent.

Turkey claims a multiple stake in Libya. In November, Erdogan signed with the GNA government in Tripoli a joint claim to the energy sources of the eastern Mediterranean. Secondly, Erdogan espouses radical Islamist elements, such as the Muslim Brotherhood, which are feared and detested by the UAE and Egypt. Ankara furthermore claims to be acting to protect $18 bn worth of construction contracts left pending after the toppling of the Muammar Qaddafi regime.

On the other side, the UAE supports Haftar which fights the Islamists. While his Libyan group, LNA spokesman Ahmed al-Mismari said on Sunday that the Libyan conflict has only a military solution, Erdogan shot back that there is no military solution.

European powers, such as Germany, Cyprus and Greece, have jumped into the conflict in support of Gen. Haftar’s LNA since Turkey’s Syrian mercenaries have increased the Islamist increment of the lineup behind the GNA. They moreover suspect that many Syrian fighters deployed by Turkey are using Libya as a jumping-off point for smuggling into Europe through its Mediterranean back door.