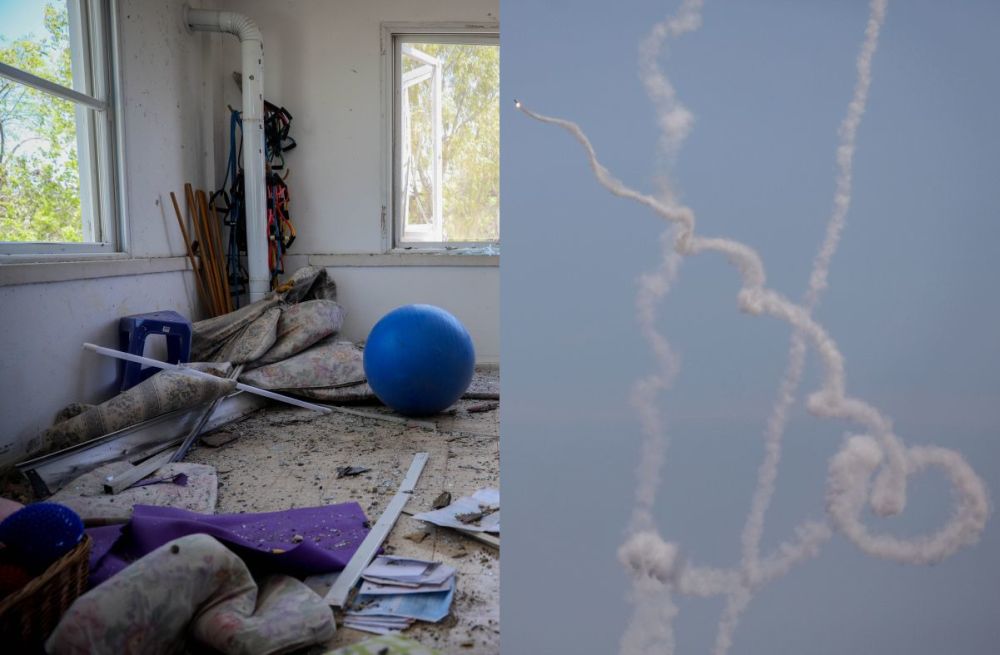 Southern Israel sustained a continuous Palestinian rocket blitz from Gaza all day Saturday, May 4, and well into the nigh, during which a man was killed in Ashkelon,. By midnight, more than 320 rockets had targeted ever widening swaths of southeastern Israel, of which Iron Dome batteries intercepted more than 60 before they exploded in populated areas. The IDF conducted non-stop air strikes on some 120 Hamas and Islamic Jihad targets in the Gaza Strip, killing some 5 Palestinians, but not stopping the rocket fire. Israeli hits included a new Jihad terror tunnel in Rafah 20 meters underground and a six-story building in Gaza City which housed the offices of Hamas’ intelligence arm.

Hamas threatened to respond by sending rockets against Beersheba, while Jihad said it was ready to bombard Tel Aviv and Israel’s main international airport at Lod. During the day, Egyptian intelligence tried its hand at brokering a ceasefire – to no effect. The IDF Home Command decided meanwhile to close the schools on Sunday in all pats of southern Israel, including the important towns of Beersheba, Ashkelon, Netivot, Ofakim, Kiryat Gat, Ashdod and Kiryat Malachi – up to the northernmost point from Gaza, Gan Yavne. More than a million residents were advised to stay close to sheltered areas until the emergency was over. The two directives, which force them to stay at home, disrupt the lives of most of these communities.

Direct rocket hits to their homes seriously injured a woman of 80 in Kiryat Gat and a man in Ashkelon, when the Palestinians, more than an hour after shooting more than 100 rockets into Israel on Saturday, May 4, widened their scope to the Lachish region (59km NE of Gaza) – targeting the towns of Kiryat Malachi and Kiryat Gat – and still further northeast to Bet Shemesh (77km away) in the Jerusalem hills. Several more people were wounded by flying shrapnel and shock. By mid-afternoon, the Palestinians had fired at least 160 rockets into Israel and there was no sign of their offensive abating. Direct hits against incoming rockets by Dome batteries prevented mass casualties and major damage.

While the Palestinian rocket blitz kept hundreds of thousands of Israelis confined to shelters, they were informed that Chief of Staff Maj. Gen. Aviv Kochavi was closeted with top commanders and security officials for consultations on Israel’s next steps, at the end of which they will be joined by Prime Minister and Defense Minister Binyamin Netanyahu. Judging from past performance, the government and high IDF command are hoping that diplomatic contacts with Egypt will put a stop to the Palestinian rocket assault on the Israeli population, without the IDF’s recourse to a large-scale military operation against Gaza. Those contacts have been ongoing for more than a year, since Hamas launched its violent March of Return rampages on the Gaza-Israeli border, with no practical outcome – aside from fruitless Cairo mediation effort for a long-term truce which never materializes.

In the interim, the Palestinian terrorists have honed their skills and upgraded their forces to regular militias and gained overweening confidence. Saturday afternoon, Hamas boasted that its next attacks would target the Ben Gurion international airport, the Dimona nuclear city, Ashdod port and the Haifa oil refineries. While Jihad set its sights on the Eurovision contest taking place in Tel Aviv on April 13.

Only last week, IDF officials tried presenting the Hamas rulers of the Gaza Strip as making an effort to reach a truce with Israel, except that the pro-Iranian radical Islamic Jihad kept on putting spokes in the wheel by launching long-range rockets against Israeli civilians. This false picture was exposed on April 29, when Hamas fired a long-range rocket into the sea off Israel’s largest port at Ashdod. And the heavy rocket barrage on Saturday finally shot down that pretext when it turned out that the scores of missiles aimed across a wide spectrum of civilian targets were being launched and orchestrated on orders of a joint war-room which Hamas and Jihad had established in the Gaza Strip. How come that the IDF and its intelligence arms were caught napping on Saturday?

It is also worth noting that the IDF has not made any serious effort to put a stop to the heavy rocket barrage at source even after southern Israel was pummeled for six hours or more. Meanwhile, Gaza’s closest neighbors and the towns of Rehovot, Sderot, Ashdod, Ashkelon, Netivot and Ofakim went on high preparedness after the first wave of 100 rockets, most of which were shot down by Iron Dome batteries. The Home Command later ordered local councils to open public shelters, public events, including two soccer games, canceled, farmers were told stay away from their fields and all residents to stay close to sheltered areas.

Finally, towards Saturday evening, official word came from the prime minister’s office and the IDF command, with little comfort for the battered population. The IDF had decided to shut the Erez and Kerem Shalom gateways into the Gaza Strip until further notice and close Gaza waters to Palestinian fishing. Furthermore, the prime minister had decided to summon the security cabinet into session  – but not before Sunday.