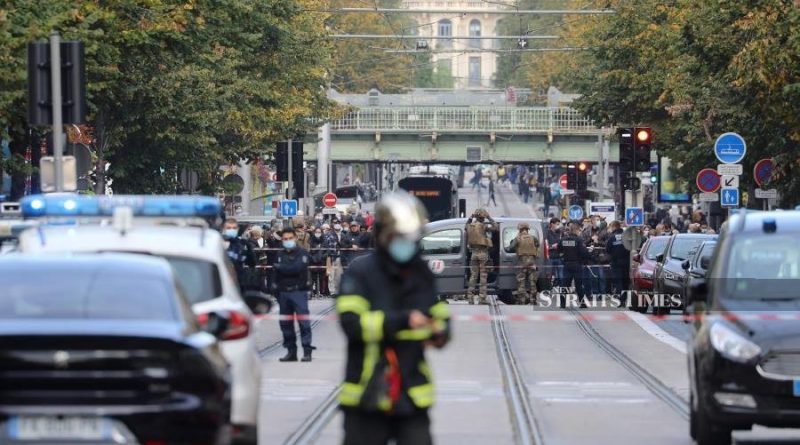 French police named the knifeman detained after he killed three people at Notre Dame Church in central Nice on Thursday, Oct. 29 as “Brahim,” aged 25. He beheaded one of his victims, a woman, in the same way as another jihadist murdered a French teacher earlier this month. At least seven more people were injured.

A short time later, another man with a knife was fatally shot by police officers in Avignon. He was shouting “Allahu Akbar” while attacking them.  In the southeastern French city of Lyon, another man armed with a long knife was arrested as he attempted to board a tram. He had been flagged by French intelligence. And in the Saudi town of Jeddah, a local man was arrested for stabbing a security guard outside the French consulate.

As jihadist attacks gained in France – with two decapitations in a month – France went on the highest “terror attack emergency” level. A special cabinet meeting on the crisis is scheduled for Friday. President Emmanuel Macron arrived on the scene of the attack at the church in Nice, one of whose caretakers was among the three dead victims.

“France is once again the victim of Islamic-fascism, said Mayor Christian Estrosi as police cleared people from the crime scene. The anti-terrorism prosecutor’s office said an investigation had been opened into the terrorist connection of the attack.

France was still reeling from the beheading earlier this month of a French teacher Samuel Paty for using the Charlie Hebdo satirical magazine’s Prophet cartoons in a class on freedom of expression.

President Emmanuel’s outraged response to that latest atrocity was a vow to promote France’s traditional secularism and separation of religion and state. Solidarity marches brandishing the Charlie Hebdo cartoons have taken place since the teacher’s murder. (Five years ago, two Muslim brothers massacred 12 people at the Charlie Hebdo magazine’s office for publishing cartoons.)

In a backlash from the Muslim world, France and its president have been accused of an anti-Islam agenda. Paris recalled its envoy from Ankara after Turkish President Recep Erdogan called for a universal Muslim boycott of French products and said that President Macron needs a “mental check-up.”

The lower house of parliament in Paris paused its debate on a fresh lockdown to go into effect in France on Friday for a minute’s silence in honor of the Nice victims. The interior minister called a crisis meeting at the ministry.
The attack brings back memories of France’s deadliest terrorist episode when on J14 July 2016, in the same French Rivera town, a Tunisian terrorist drove a truck into the Bastille Day crowds and killed 86 people.