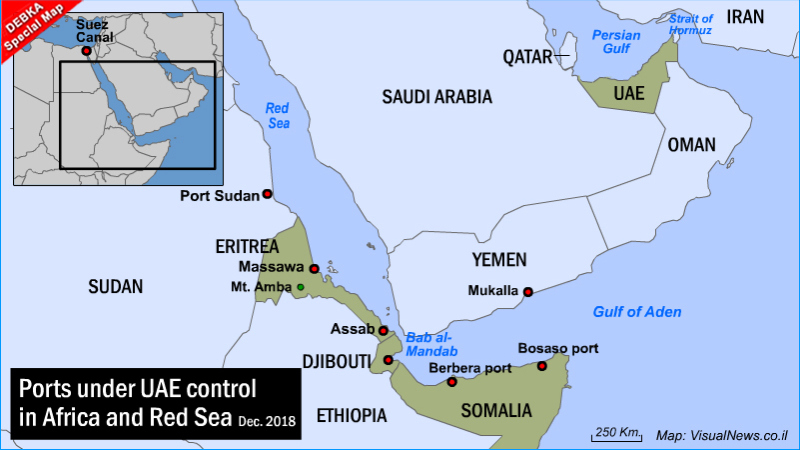 While intentional attention was engaged elsewhere, the United Arab Emirates was splashing out megabillions to buy controlling stakes in the Suez Canal and the region’s most strategic ports, often stealing a march on rival Gulf bidders.

The UAE’slatest prize is a major share in the Suez Canal and its economic zone projects. TheDubai Ports World’s (DP) acquisition of a 49 percent partnership in the Suez CanalAuthority (SCA) was announced in the first week of December by the Egyptian government.The DP has undertaken to implement projects in the northwestern area of the SuezGulf, Egypt’s Prime Minister Mostafa Madbouli announced, as part of the company’s“extensive” investment in the region.

This is not the UAE’s first venture in Egypt. In 2008, the DP acquired 90 percent of the SokhnaPort Development company – Sokhna is one of the most important Red Sea ports. Thecontract stipulated that the DP would expand the port’s capacity to 2 million containersper year and invest some $1.5 billion in Egypt over five years.

Acquisition of the Suez property caps the Emirate’s control of a network of key ports running from the southern end of the Indian Ocean, through the Horn of Africa, the Gulf of Aden, the Red Sea and finally, the Suez Canal.

In Somaliland, the UAE owns a controlling interest in the port of Berbera. The Horn ports are adjacent to the Bab al-Mandeb strait, at the mouth of the Red Sea, through which 4.8m barrels of oil passed every day in 2016.

The Emiratis are challenged by Qatar and its ally Turkey, which are building new ports in Sudan, as well as their close friend Saudi Arabia, which is negotiating for the rights to set up a naval base in Djibouti. All three Gulf emirates are bidding for farmland in East Africa, to gain food supplies for their arid countries. They are looking forward to the farms they own there growing crops for export to the Gulf.

The UAE has also gained a presence in Bosaso in Puntland, Barawe in Somalia and the southern Somali Kismayo. Most significant is Dubai’s takeover of Mukalla Port, which is situated in southern Yemen’s Hadhramaut region between the Omani border and Aden. The UAE has sunk more than a billion dollars in the last three years in the transformation of Mukalla into South Yemen’s most important port, even overshadowing Aden. A military base there, commanding the Gulf of Aden, draws a line against Iran’s expansionist drive and challenges the aspirations of fellow Gulf oil emirates, Qatar and Oman.

Across the Red Sea, in the Horn of Africa, Mukallah is paired by Dubai’s strong move into Djibouti on the Red Sea coast, the strategic, key to the Bab al Mandeb strait and the Gulf of Aden. There, the UAE has built and is operating the new Doraleh container terminal, which has been expanded to become Djibouti’s biggest employer and main source of revenue. Running at nearly full capacity, Doraleh handles 800,000 containers a year. The bulk travels from Djibouti along a Chinese-built railway to the Ethiopian capital of Addis Ababa.

Contemplating further expansion of its holdings, Dubai Port is negotiating with President Omar Bashir for permission to build a naval base in one of Sudan’s Red Sea ports. The quiet, bespectacled UAE strongman, Crown Prince Sheikh Muhammed bin Zayed, who often stands quietly next to his more colorful partner, Saudi Crown Prince Muhammed bin Salman, is leveraging the Emirates’ vast oil income for an audacious grab and expansion of a cannily-selected network of strategic ports on the coasts of Africa, Arabia and the Middle East. At the same time, he is short of a navy or army able to keep them safe. The UAE Navy consists of about 2,500 personnel, only 12 albeit well-equipped coastal patrol boats and 8 missile boats. Neither the US forces at the Al Dhafra Air Base nor French naval strength stationed at the Camp Peace naval base at Abu Dhabi’s Port Zayed is geared for – or up to – safeguarding the UAE’s vast holdings. The Crown Prince is acting unobtrusively but firmly to repair this shortcoming by cultivating diplomatic and military ties with Israel, more about which in a separate article.