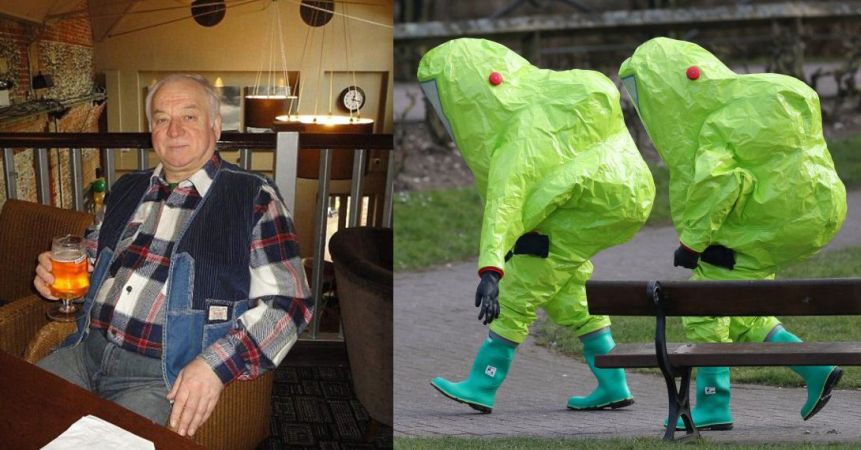 With the inquiry into the attempted murder of former Russian spy Sergei Skripal, 66 and his daughter, Yulia, 33, in Salisbury, producing new sensations, British home secretary Amber Rudd called an urgent “Cobra” national security committee meeting on Saturday, March 10. The two victims remain seriously ill in hospital after suffering a nerve agent attack last Monday in mysterious circumstances.  Unusually, Foreign Secretary Boris Johnson and Defense Secretary Gavin Williamson attended the meeting.
It was revealed on Saturday that the apparently retired former Russian spy, who for ten years passed secrets to British intelligence, continued to meet his “British handler” once a month at a Salisbury restaurant. The British agent was described as the “man in the tweed suit.: They were heard conversing in Russian and English and discussing business’ trips to Poland. The former double spy therefore appeared to have remained an active agent for British intelligence.

The murder probe also sprang an American dimension. He was discovered to have been close to a consultant who worked with the firm of Christopher Steele,  the former British spy named in the Mueller investigation into Russian meddling in the 2016 election. Steele was found to have built a damaging dossier against candidate Donald Trump out of materials provided by sources close to Hillary Clinton. The ramifications of the new discoveries almost certainly prompted the urgent Cobra committee session Saturday. It also came amid wide accusations that Moscow orchestrated the attempted assassination of the former GRU agent and his daughter. The Russians angrily rejected the charges as no better than mudslinging without evidence.
Sergei and Yulia meanwhile remain in serious condition in hospital, together with the Police Detective Sergeant Nick Bailey, 38-year, who came into contact with the nerve agent as the first responder. More than 180 army troops clad in heavy anti-contamination gear are supporting the massive police investigation in Salisbury, including the hunt for the source of the nerve agent and the would-be assassin of the Skripals. On Saturday, they descended on the local cemetery to exhume the remains of Skripal’s wife Ludmilla, who was buried there in 2012, and the ashes of their son Alexander, who died mysteriously in St. Petersburg a year ago. Among the troops brought into the city were experts in surveillance from the Royal Tank Regiment, Royal Marines from 40 Commando and members of the RAF Regiment. Chemical warfare instructors were on the ground as well as bomb disposal experts from 29 Explosive Ordnance Disposal and Search Group. The police have extended the cordon around the Skripal home and other potentially contaminated areas, including vehicles. Skripal and his daughter are thought to have recently visited the graves not long before they collapsed.

A former colonel in Russian military intelligence, Skripal was responsible for exposing to MI6 dozens of Russian secret agents operating undercover in Europe. In 2006, he was tried for passing Russian secrets to the UK and sentenced to 13 years in a Russian labor camp. In July 2010, he was one of four spies exchanged for ten Russian agents deported from the US in an historic swap involving red-headed “femme fatale” Anna Chapman. A short time later he settled in Salisbury, England. It now appears that far from dropping out of his former calling, he continued to provide services to foreign intelligence services.