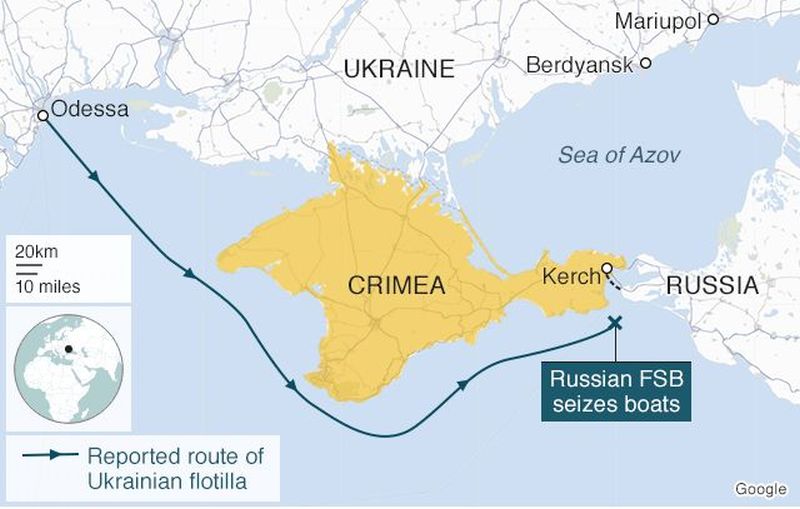 The prospect of a Trump-Putin summit in Buenos Aires, which has been scheduled for Saturday, Dec. 1, applied the last spark to a crisis just waiting to blow up in the Ukraine-Russian dispute over the Kerch Strait. (Trump cancelled at the last minute.)

A glance at the map (attached here) clearly shows that, by controlling this strait, Moscow rules the Azov Sea and cuts the Ukrainian ports of Mariupol and Berdyansk off from access to the Black Sea. This reduces the 44 million Ukrainians to a single working sea port – Odessa. The 3.1km long, 15km wide. 18m deep Kerch Strait connects the Azov and Black Seas. In 2003 Moscow and Kiev signed an agreement providing for the sharing of the Azov Sea and its access point through the Kerch Strait and promising freedom of navigation for Ukraine and Russia. That arrangement worked until 2014, when Moscow annexed the Crimean Peninsula and made it part of Russian sovereign territory. The Kerch Strait was no longer shared by Russia to the east and Ukraine to the west, but wholly under Moscow’s control. To underline this domination, Russia’s president Vladimir Putin formally dedicated a new 19km bridge on May 2018 by driving a truck across it.

Since then, Moscow has maintained a ramped-up naval presence at the strait. For seven months, Russian coastguards have been holding up Ukrainian vessels bound for Mariupol and Berdyansk as well as ships from other nations. The damage to Kiev’s economy is extreme. Shipping companies are avoiding visits to Ukrainian ports, since every Russian hold-up costs them up to an extra $15,000 per day. Since most of Ukraine’s steel and wheat exports go through Mariupol port, its economy has paid a steep price for Russian interference.

Senior officials in Kiev accuse Moscow of imposing a naval blockade on their country and of flagrant violation of their 2003 treaty, which guaranteed its freedom of navigation in the Sea of Azov.

On Sunday, Nov. 25, Ukraine conducted a surprise test for restoring its shipping route. A tugboat and two small armored ships were sent through the Kerch Strait. When they reached the mouth of the Sea of Azov, they were rammed and fired on by Russian coastguard vessels, which boarded and towed them to a Russian port with 23 sailors on board. Six Ukrainian sailors were injured, one of them critically. Since Kiev’s army, navy and air force combined have nowhere near the clout needed to take on the Russian army, President Petro Poroshenko made his only available response: He asked parliament to impose martial law – initially for 60 days, then reduced to 30 days on the advice of the US, Germany, the UK and France.

Moscow reacted by a phone call to German Chancellor Angela Merkel. In which Putin expressed “serious concern” over Ukraine’s decision to put its armed forces on alert and to introduce martial law,” which, he said, could “spark a global crisis.” He asked Berlin to “influence the Ukrainian authorities to dissuade them from further reckless acts.”

Russia’s UN ambassador Dmitry Polyanksy claimed the Ukrainian ships had entered Russia’s territory waters for “a long-planned provocation by Ukrainian president Petro Poroshenko and his western backers, as a distraction from his unpopularity in the run-up to elections next March.” The declaration of martial law, said the ambassador, was “about cancelling the elections.”

At this point, US Secretary of State Mike Pompeo stepped in to accuse Moscow of a “dangerous escalation and violation of international law.” He said, “The United States condemns this aggressive Russian action. We call on Russia to return to Ukraine its vessels and detained crew members, and respect Ukraine’s sovereignty and territorial integrity within its internationally recognized borders, extending to its territorial waters.”

President Donald Trump, when asked what he thought about this crisis, answered: “Not good, Not happy about it all.” He did not apportion blame, possibly since he tends to avoid criticizing the Kremlin, but in reference to Pompeo’s statement, he added that the US had “let our position be known.”

Moscow’s response to the US demand to return the detained crew members came on Tuesday, Nov. 27 when a Russian court sentenced the first batch to two months in prison. They were accused of illegally crossing the Russian border.

The Ukraine president then asked for NATO to send ships to the Sea of Azov “to assist Ukraine and provide security.” He was whistling in the dark.

But on Thursday, Trump call off his meeting with Putin when Russia failed to send the Ukrainian sailors back.

DEBKA Weekly’s sources note the timing of the spiraling crisis just days before Presidents Trump and Putin are scheduled to meet face to face on the sidelines of the G20 summit in Buenos Aires on Saturday. Our sources have noted in the past that whenever the Syria issue is due to come up at a Trump-Putin summit, a flareup occurs over Ukraine. This time, the military standoff in both trouble spots is closer than ever before to full-on eruption.