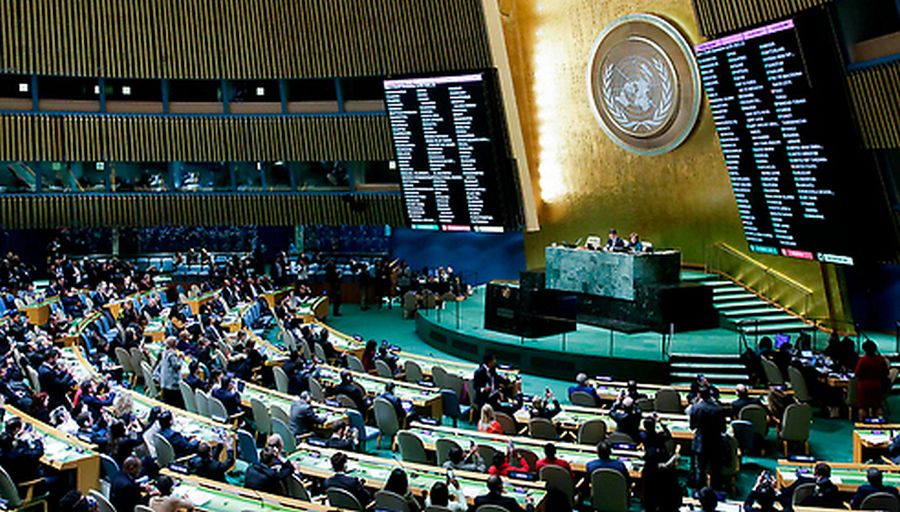 At UN Center in New York, a resolution condemning Donald Trump for recognizing Jerusalem as Israel’s capital won a 128 majority of 193 member-states at the General Assembly, with 9 votes against, 25 abstentions and 21 absentees on Thursday, Dec. 21. This was a less than satisfactory outcome for the Palestinians, who had expected their usual success in sweeping the international board. The Trump administration fought back by threatening to hit opponents in the pocket and Ambassador Nikki Haley’s powerful eloquence did the rest.
DEBKAfile’s sources noticed, however, that, although the Palestinians had defined this vote as “fateful” for Jerusalem, Palestinian Authority Chairman Mahmoud Abbas was conspicuously absent from his delegation’s corner. DEBKAfile’s sources picked him up 11,000 kilometers away at the Abu Dhabi palace of UAE Crown Prince Sheikh Mohamed bin Zayed (MbZ). Instead of collecting international pats on the back for the majority UN vote, he had been forced to endure a dressing-down from one of the most powerful and wealthy Arab leaders, who told him in no uncertain terms: The international struggle for Jerusalem is no doubt important and the UAE will of course be behind you. But first, you must stop beating on Donald Trump’s Jerusalem policy as though it is a declaration of war. Furthermore, Sheikh bin Zayed insisted, you had better break off ties this instant with Tayyip Erdogan, the Turkish president, and distance yourselves from his anti-American abuse.

Abbas had been summoned to Riyadh the day before, where he was given an audience with King Salman. But before he was out of the palace door, Saudi Crown Prince Muhammed bin Salman gave him a bawling out which presaged the one he received in Abu Dhabi. Both Arab rulers made it abundantly clear to Mahmoud Abbas that to win their support on Jerusalem, he will have to back away fast from the front he has opened up with Erdogan against President Trump and the United States. The fate of Jerusalem was therefore determined Thursday in the Arabian Gulf region rather than New York where the UN vote was little more than a formality.

77 thoughts on “While the UN voted, Jerusalem’s fate was determined in Riyadh and Abu Dhabi”