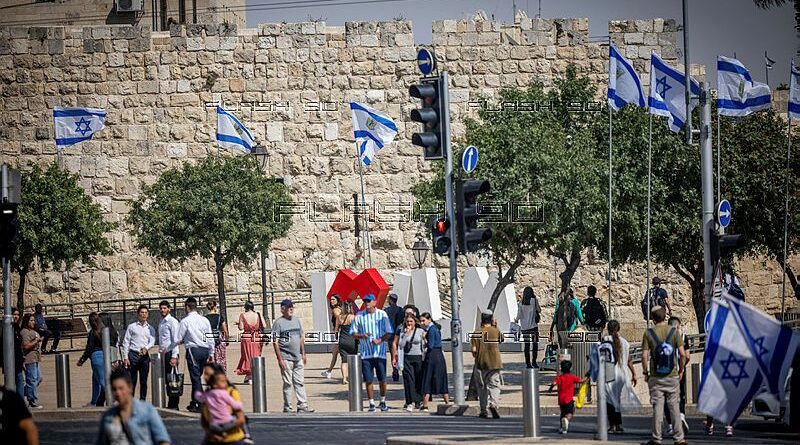 Palestinian threats have not persuaded Israel to give up its annual flag procession through the Old City of Jerusalem next Sunday, May 29 in celebration of the anniversary of the capital’s reunification following the 1967 war. Police have restricted to 16,000 the number of flag bearers who will dance their way through the Muslim Quarter to the Western Wall, under massive police protection.

Among other dire threats, Hamas and other Palestinian terrorist groups warn that a fresh hail of rockets and war will greet any “provocation.” Last year the Hamas terror group fired a barrage of rockets at Jerusalem as the march was underway, forcing it to be stopped and rescheduled a month later.

Leader of the Hezbollah terror group, Hassan Nasrallah on Wednesday, warned that if Israel “violates” Temple Mount mosques in Jerusalem, it will cause “an explosion in the region.”

The US embassy advised staff and their families to avoid the Old City through Monday, due to “ongoing tensions and potential security issues,” and remain vigilant.

Israel Police Commissioner Kobi Shabtai on Wednesday ordered full mobilization ahead of the event in Jerusalem as well as the mixed Jewish-Arab towns across the country. Three Border Guard reserve units received special training for duty in the capital on Sunday. In another precaution, the IDF’s air defense systems are geared up to respond to rocket fire from the Gaza Strip and emergency shelters are laid out in Sderot.

According to police planning, 8,000 marchers are to sing and dance their way to the Western Wall through Nablus Gate, while  another 8,000 enter through Jaffa Gate. Outside that gate, thousands more will dance outside the Old City Wall.

Security tensions are already high, since in the past month 19 Israelis were killed in Palestinian terrorist attacks mainly in Israeli cities.