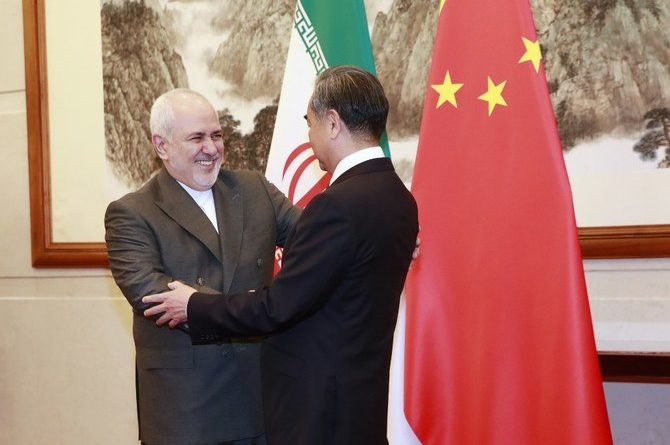 Under the still-secret deal, China will have unrestricted access to Iran’s air bases and promises to rebuild its EW capabilities in return for cheap oil and factories with transport links to carry its exports to the West. Russia may also be involved.

Usually the butts of Tehran’s hardliners, President Hassan Rouhani and FM Mohammed Zarif, the live wires of the landmark as yet unpublished 25-year comprehensive cooperation agreement inked in between Iran and China, are now in close rapport with Supreme Leader Ali Khamenei and the Revolutionary Guards over this deal. While promising to invest heavily in Iranian infrastructure, oil and technology, China appears to be offering military benefits that could change the geopolitical balance of power in the Middle East – provided the deal is finalized and takes off.

Meanwhile, “the lion-dragon deal,” is drawing strong objections in Iran – especially from some powerful lawmakers who say it feeds China’s “colonialist greed.” Former President Mahmoud Ahmadinejad attacked its secrecy, saying in a Telegram post that any agreement with foreign parties “that does not consider the Iranian nation’s will is invalid.” One parliamentarian Hojjat al-Islam Hassan Nowrouzi, accused the government of granting China a 25-year lease of Kish Island and secretly selling fishing rights in it southern waters.

Zarif retorted to the critics: “Pay attention to the global shift in power.” A government spokesman said on June 23 that the deal proves the “failure of US policies aimed at isolating Iran.” The hardline Javan noted this week that this is the best time for the deal since the US feels “weak” against China.

Iranian sources have revealed some of the the top-secret military elements of the accord, as covering “complete aerial and naval cooperation between Iran and China” with a key role for Russia. If the final details are sewn up in the second week of August at a meeting of Iranian IRGC officials with Chinese and Russian counterparts, then from Nov. 9, Sino-Russian bombers, fighters and transport planes will be found using purpose-built dual-use facilities near the existing airports at Hamedan, Bandar Abbas, Chabahar, and Abadan.”

“To counter U.S. and/or Israeli attacks.” The Krasukha-2 and -4 systems are also likely to feature in the overall EW architecture. The Krasukha-2 can jam Airborne Warning And Control Systems (AWACS) at up to 250 km. “One of the Russian air jamming systems is to be based in Chabahar and will be capable of completely disabling the UAE’s and Saudi Arabia’s air defenses, to the extent that they would only have around two minutes of warning for a missile or drone attack from Iran,” one of the Iran sources told the OilPrice.com publication last week.

Beijing plans to allot Iran a key position on its “One Belt, One Road” strategy by adapting its infrastructure. To begin with, China intends to use the cheap labor available in Iran to build factories that will be financed, designed and overseen by big Chinese manufacturing companies with identical specifications and operations to those in China. The manufactured products will then reach Western markets through new transport links, also planned, financed and managed by China.

Tabriz, home to a number of key sites relating to oil, gas and petrochemicals, and the starting point for the Tabriz-Ankara gas pipeline, will be a pivotal point of the 2,300 km New Silk Road that links Urumqi (the capital of China’s western Xinjiang Province) to Tehran, and connecting Kazakhstan, Kyrgyzstan, Uzbekistan and Turkmenistan along the way, and then via Turkey into Europe.

Oil sources report too that China will invest $400 billion to develop Iran’s oil, gas and transportation infrastructure, gaining a 32pc discount for 25 years on its purchases of Iranian oil, gas and petrochemicals. Five thousand Chinese security personnel will be deployed in Iran to protect Chinese projects.

Most analysts warn that Tehran is embarking on a risky gamble. While Tehran is desperate for a partner to face the Trump administration’s “maximum pressure” campaign, Beijing has never overtly challenged it and its global aspirations extend well beyond the Middle East. Furthermore, the future of the current US campaign depends on the outcome of the Nov. 3 presidential election. Therefore, for its accord with China to be realized, Tehran will be heavily dependent on external factors outside its control.