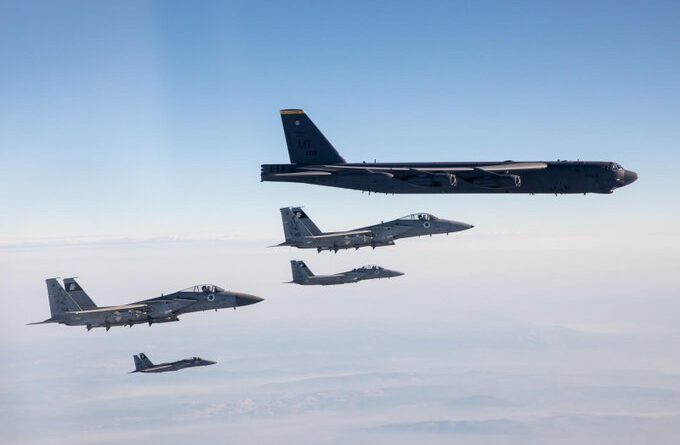 President Joe Biden sent a clear signal to Iran with a pair of US B-52 heavy Stratofortress bombers flying Sunday, March 7, over the Gulf region on their second mission under his administration. They also conveyed a message of solidarity. Israeli Air Force F-15s accompanied the US bombers over Israel before swinging around and heading for home base from their seventh mission over the Gulf. The B-52 bombers were also accompanied by military aircraft from Saudi Arabia and Qatar, US Army’s Central Command said.

The CENtCOM statement did not mention Iran, only that the heavy bombers’ operation was intended to “deter aggression and reassure partners and allies.” The Biden administration, while pushing for diplomacy with Iran, was also making a show of solidarity with America’s allies and interests in the region, where tensions escalated sharply on Sunday.

After claiming to have destroyed 10 armed drones launched by the Iranian-backed Yemeni Houthis on Saturday, Saudi Arabja said its coalition air forces had blitzed Houthi military sites in Sanaa, the capital, and other parts of Yemen. State TV in Riyadh said seven drones were intercepted in 24 hours over Khamis Mushait and Jazan in southern Saud Arabia. The United States consulate in the Saudi Red Sea city of Jeddah issued an advisory, citing reports of suspected attacks and explosions near Jeddah and Khamis Mushait.

This weekend, therefore, the US president’s efforts to pull Saudi Arabia out of the Yemen civil war, in the hope of easing the path to dialogue with Tehran, took two large steps back.