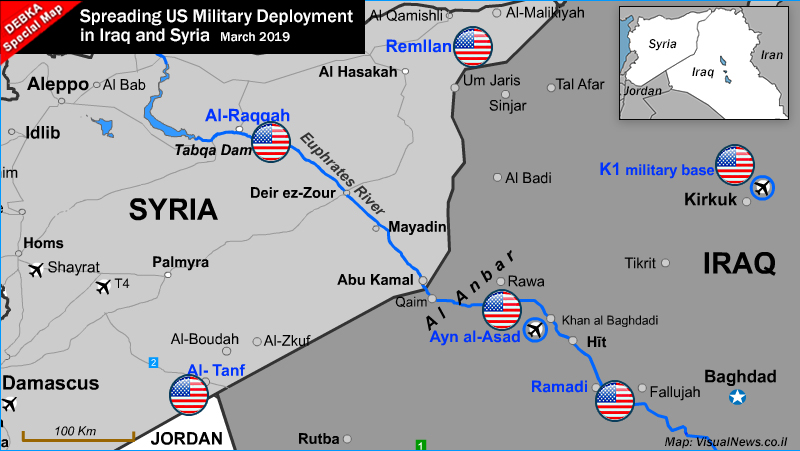 Exclusive: The US has continued to buttress its military presence in E. Syria and W. Iraq in six bases, since the buildup was first reported by DEBKAfile on March 9. On March 20, President Donald Trump confirmed the decision to leave 400 US troops in Syria – 200 in the north and 200 at Al Tanf on the Jordanian border. (He did not speak about 200 on the Israeli border, as widely reported.) Two days earlier, Gen. Joseph Danford, Chairman of the US Joint Chiefs of Staff, denied a Wall Street Journal report that the US planned to leave 1,000 soldiers in Syria, while unnamed US military sources spoke of 1,500 American troops that would remain in North Syria.

DEBKAfile’s military and intelligence sources have sorted out the conflicting reports and can confirm that the US has substantially boosted its military strength in both countries and distributed the strength among six bases:

Three are located in Iraq. For the first time since ISIS was defeated there in early 2016, US Marines have been posted to a base near the Iraqi town of Ramadi, capital of the western governorate of Anbar and 1110km from Baghdad. (See attached map.).

Reinforcements have also reached the US K1 military base near Kirkuk. Earlier this year, the US army converted this facility into its main depot for the intake of American troops and equipment withdrawn from Syria. Since the withdrawal has wound down, K1 has been built up for controlling the northern sector of the Iraqi-Syrian border from Iraqi Kurdistan.

The third US base consolidated in Iraq this week was the big Ayn al-Asad Airbase (which President Trump visited last Christmas).

A glance at the attached map reveals that by dint of their newly-reinforced and deployed strength, US forces in Iraq are able to afford the American Middle East command full control of central, western and northern Iraq.
The US bases augmented in Syria this month are located in three regions:

The southern Al Tanf base, just 24km west of the Syrian-Jordanian-Iraq border junction, has been strengthened with additional Marine and artillery forces.

Al Raqqa, the Islamic State’s stronghold in Syria until its ouster by US-backed Kurdish forces in 2017, is the second base.

And the third is the US air base at Remelin northeast of Hasakeh, the Syrian Kurds’ political center.

The six bases are focal points of US military command control of around 1,500 sq.km of territory between Ramadi in central Iraq, up to Hasakeh in northern Syria, and down south to Al Tanf. This wedge of land is bisected down the center by the Iraqi-Syria border.

The new US military deployment in Syria and Iraq gives substance to President Trump’s statement that the time has come to recognize Israeli sovereignty over the Golan. Most significantly, it is a high impediment for the plan hatched between Tehran and the Assad regime to go forward without delay for the establishment of an Iranian land bridge to the Mediterranean after first reopening the Iraqi-Syrian border. Iranian, Syrian and Iraqi generals began planning this project when they met on March 18 in Damascus.

51 thoughts on “US boosts forces in Iraq/Syria, backing recognition of Israeli sovereignty over Golan”