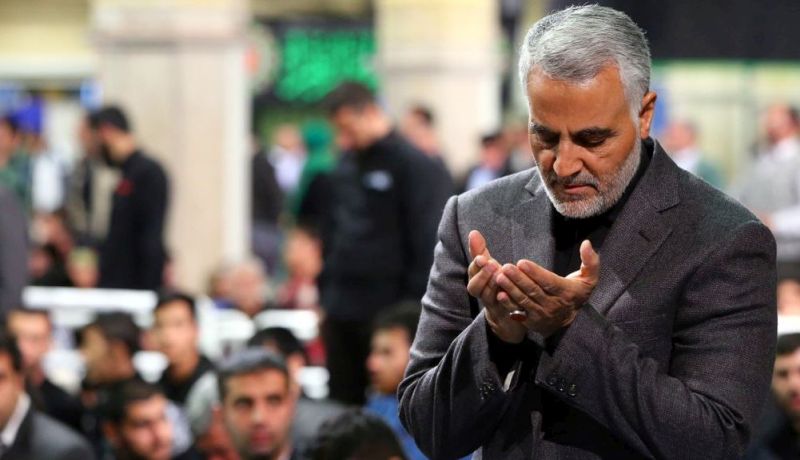 Vilified in Washington as a diabolical “terrorist,” Al Qods chief Gen. Qassem Soleimani, 57, is going from strength to strength in Tehran. He is seen as the all-powerful supreme leader Ayatollah Ali Khamenei’s choice as next president of Iran. The proactive Soleimani’s hand was behind the ayatollah’s decision on April 21 to remove Maj. Gen. Mohammad Ali Jafari as commander of the Revolutionary Guards (IRGC) and replace him with his younger and more belligerent deputy, Hossein Salami, since elevated to the rank of major general.

Reporting this, DEBKA Weekly’s Iranian and intelligence sources add that the presidential replacement process has not yet been determined. Will it wait for Hassan Rouhani to complete his tenure in 2021? Or will Rouhani be sacked in mid-term for Soleimani to move in? Iran’s revolutionary constitution allows for this to take place in “exceptional circumstances, such as the president’s “deposition, resignation or death.”

Covered in laurels as hero of the Shiite revolution on multiple Middle East war fronts, Gen. Soleimani has turned to boosting his popular image at home. He is to be found these days leading the operation to save the people of the restive oil-province of Khuzestan from the worst flood disaster to strike this oil region in decades. While the regime in Tehran is preparing for a military clash with the US and Israel over tightened US sanctions (see a separate article on this), Soleimani is feeding into his propaganda machine images of himself and his Iranian and Iraqi acolytes, Hadi Al-Amiri, commander of the Bader Brigades and Abu Mahdi al-Muhandis, commander of the PMU, as they bend down for humanitarian work.

In Washington meanwhile, Secretary of State Mike Pompeo described this powerful Iranian commander in early April as a “terrorist” who “has the blood of Americans on his hands… as does the force that he leads.” A Pentagon spokesman laid 603 US personnel deaths in Iraq at the door of “Iran-backed militants.”

Relegated by both to the distant past were the years 2016 and 2017, during which US forces and Soleimani’s officers operated hand in hand in the battles to liberate Mosul from Islamic State captivity, as well as a judgment made in Washington as recently as 2018 that the US could work with Soleimani in Baghdad. These days, Soleimani is labelled America’s “ultimate foe in the ayatollahs’ regime.”

This discredit perversely enhances his advancement at home. Taken with the warm relations he has carefully cultivated with senior members of the Shiite clergy and his high standing in the supreme leader’s graces, Soleimani’s path to the top ranks of the Islamic regime is wide open.

The Al Qods Brigades, today a military-terrorist-espionage colossus, was his ladder. Established by the Revolutionary Guards Corps as its external arm for undercover operations, al Qods’ tentacles coil around every corner of the Middle East. Less than 40 years ago, during the long and bloody war with Saddam Hussein, the brigades were a small Iranian special forces unit known as the “Radwan Force,” designed for undercover operations behind Iraqi enemy lines. Solemeini, then aged 18, took part in those operations. In the 80s, he was reassigned to Lebanon for the task of establishing Hizballah, Revolutionary Iran’s first foreign surrogate militia. Then, in 2003, after the US invaded Iraq, he was summoned to Iraq to establish the first Shiite militias for fighting the Americans and thwarting their influence in Baghdad.

Today, the sprawling Al Qods numbers tens of thousands of fighters, towers over its founding father, the IRGC, and is immersed in the Middle East’s six main conflicts, in Syria, Lebanon, the Gaza Strip, Iraq and Yemen, besides aiding and arming Shiite terrorist cells buried in the Gulf countries of Saudi Arabia, Kuwait and Bahrain and among Shiite minorities in Africa.

lthough a reputation for invincibility goes before him, in the light of his successes in promoting Iran’s foothold, Soleimani’s detractors point to his flops. In Iraq, for instance, Tehran’s once buoyant influence is waning, its expansionist appetite frustrated by a burgeoning nationalist movement among the once fraternal Shiite majority. And Iran’s most ambitious goal to carve a land bridge from its own shores via Iraq to the Mediterranean coasts of Syria and Lebanon, the overriding motivation behind its involvement in the Syrian war, has not materialized now – or possibly ever. Another of the Iranian general’s pet plans is fast receding, the formation of a second Iranian front against northern Israel in addition to Hizballah’s anti-Israel deployment in Lebanon.