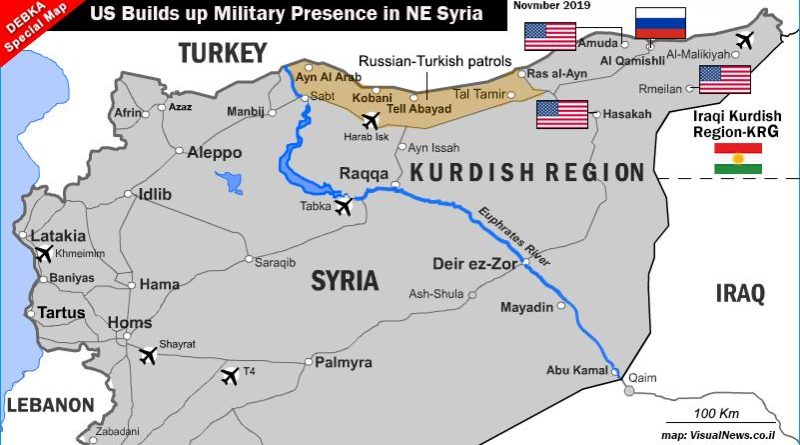 The US race against Russia for fresh military footholds in northern Syria is gaining further momentum. DEBKA Weekly 870 reported last week: …the US military deployment in the region [north and east Syria] continues to swell with the further intake of US soldiers. They were seen last week taking up additional positions in Qamishli, Jazira, Deir ez-Zour, Shaddadi, Derik and Hasaka, where they are hooking up with SDF and YPG units.

This week, the influx of US troops into North Syria was building up into a veritable race with Russian forces for control of Kurdish towns and sites in the region and a dominant presence on its main highways.

The Americans are strides ahead of the Russians at present, DEBKA Weekly’s sources report, bolstered by the near availability of a wide range of US military forces in the region. A 5,000-strong US troop reserve is available in Iraq, should CENTCOM, which is responsible for the Syrian front, decide that more reinforcements are needed. They may be also drawn from the US contingents maintained in Jordan, Israel or any of the Gulf emirates. The US buildup is also making good use of the Syrian Democratic Forces (SDF) and its backbone, the Kurdish SDF militia.

By contrast, Russian military strength in the region is confined to a troop presence in Syria of no more than 3,000 combatants, backed mainly by a modest fleet of Su-35E superior fighter planes. That’s about all the military muscle Moscow can raise in the near neighborhood. Should the Russian high command need reinforcements for Syria, they would have to come from Russian deployments massed around the Black Sea, Crimea or the South Caucasus.

Moscow would then have to cope with a major surge in the budget earmarked for Syria, estimated at present as roughly $250m per year, which Moscow is already hard pressed to cover. The Russians have therefore turned to Syrian units and civilian mercenaries for extra strength, although their capabilities are not up to much. They are furthermore scattered thinly in small detachments of 50-60 men each across wide stretches of terrain in the North. This wide distribution boosts the costs of maintenance, logistics and regular supplies of food, fuel and equipment, way past the comparative overheads of large concentrations in one place.

Undeterred, the Russian command at the Khmeimim Air Base near Latakia this week carried on with the project of setting up a new air base at Qamishli airport in northern Syria, after clinching a deal with the Kurdish proprietors for a 49-year lease on the property. On Sunday, Nov. 11, (as DEBKAfile first revealed) Russian forces were seen on the move at Qamishli airport:

• A convoy of 50 military trucks carried 300 Russian personnel to the new base. Part were combat troops assigned to the site’s defense; others belonged to the Russian Air Force Engineering units.

The deployment of these formidable air defense weapons points to Moscow harboring plans for Qamishli beyond the usefulness of a small local air base. Moscow appears to be preparing to challenge US and Israel’s air force command over the Syrian-Iraqi border region and Iran’s dominant military presence there.

The US military reacted fast to counter the Russian move. On Monday, Nov. 16, a large contingent of US troops was transferred from northern Iraq to boost the American Himo military base in the rural Qamishli subdistrict. US engineering units escorted by soldiers entered the Syrian town of Amuda and went to work for setting up a new American base.

Amuda is situated in the Kurdish Hashaka Governorate of northwest Syria near the border with Turkey. In the course of the Syrian civil war, it came under the civil control of the Autonomous Administration of North and East Syria and the military control of the Syrian army. It lies west of Qamishli, just 25km away (see attached map), and far from Syria’s oilfields at Deir ez-Zour. A US military presence in Amuda does however bring it close to the borders with Turkey and Iraq and boosts US control of Syria’s northern border with the KRG, the Kurdish semiautonomous region of northern Iraq.