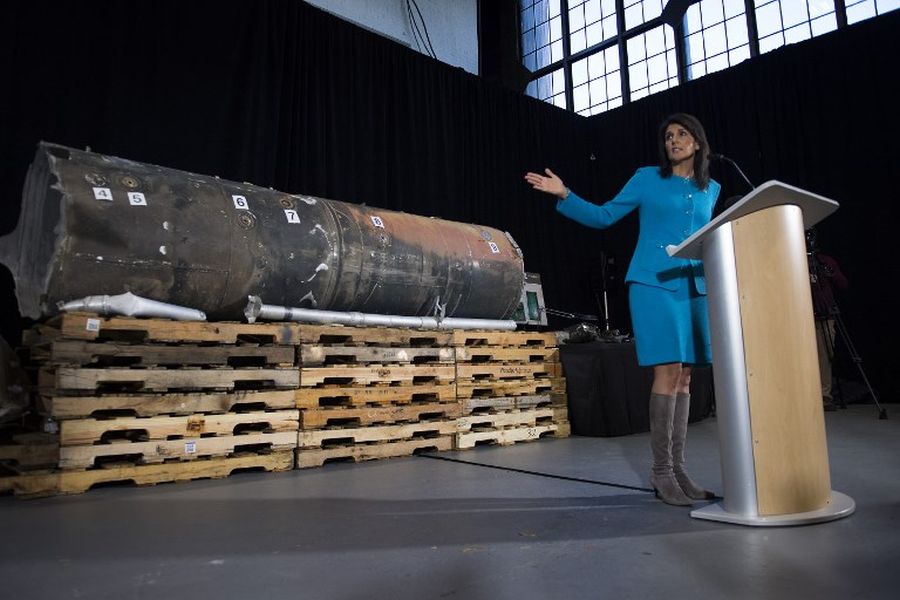 An array of Iranian weapons collected from the Yemen battlefield was exhibited for the first time at a US base outside Washington as “concrete proof” of Iran’s violation of UN resolutions. Among the objects displayed in a hangar at Joint Base Anacosta-Bolling were charred remains of the Iranian-made short-range Qaim ballistic missile fired from Yemen on Nov. 4 at the international airport outside the Saudi capital of Riyadh. It landed in a remote suburb. Tehran denied supplying the Houthis with such weapons and described the arms exhibition as “fabricated.”

There were also three intact Iranian weapons systems and debris from a fourth. They included anti-tank weapons, as well as a drone-like navigation system for an explosives-packed speed boat used by the Houthi insurgents to attack a Saudi warship on June 30 on the Red Sea. The vessel is programmed in advance to seek out and strike the targeted ship without intervention from the shore. The Toophan anti-tank guided missile, like other items on display, is used by no army other than Iran and now the Houthis. Some of the fragments bore the markings of Iran’s arms industry.

Nikki Haley, US ambassador to the UN told a news conference at the hangar: “These are Iranian made, these are Iranian sent, and these were Iranian given.” Under the UN Security Council resolutions confirming Iran’s 2015 nuclear deal with six world powers, Tehran is prohibited from proliferating its weaponry to other nations without prior Security Council permission. A separate resolution specifically bans supplying arms to Abdul-Malik al-Houthi, who founded Yemen’s rebel movement.
All of the recovered weapons were provided to the United States by Saudi Arabia and the United Arab Emirates, the Pentagon said. The unprecedented presentation – which Haley said involved intelligence that had to be declassified – is part of President Donald Trump’s new Iran policy, which promises a harder line toward Tehran. That would appear to include a new diplomatic initiative. Laura Seal, a Defense Department spokesperson added: The new strategy addresses the totality of Iranian threats and malign activities: nuclear; ballistic missile development and proliferation; counter-maritime operations; cyber; and support to terrorism and unconventional warfare. The equipment in the hangar, she said, is presented so that US allies and organizations like the UN “can be clear-eyed about Iran’s activities.”