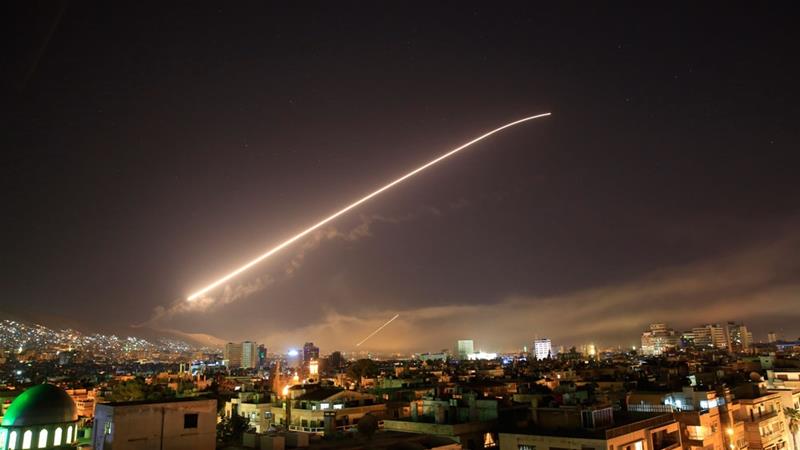 In the first wave, the three allies targeted a chemical stockpiling center outside Damascus, and two chemical sites near Homs.  President Donald Trump said he had ordered US military precision strikes against Syria in collaboration with the UK and France in response to a chemical attack that killed more than 70 people. Trump spoke in a television statement early Saturday, April 14, as explosions were heard in Damascus. Syria reported intercepting at least 13 incoming missiles. Russia said the action would not be left “without consequences.” Trump explained that the strikes would target the regime’s ability to use chemical weapons and the three allies were willing to carry out “sustained pressure on the Syrian dictator Bashar al-Assad until he agreed not to use chemical weapons in the future.” He stressed, “The combined American, British and French response will integrate all instruments of our national power: military, economic and diplomatic.” He condemned Russia and Iran for propping up the Syrian regime.

The targets hit were a scientific research facility in Damascus, connected to the production of chemical and biological weapons;  a chemical weapons storage facility west of Homs; a chemical weapons equipment storage site and an important command post, also near Homs. According to unconfirmed sources, other sites targeted near Damascus included a military base in the Dimas area; and army depots in the eastern Qalamoun, where Iran and Hizballah have been building under ground facilities.  DEBKAfile’s military sources report that the strikes were evidently the first wave of the joint operation in Syria. Washington, London and Paris may now await Russian and Iranian responses before deciding on how to proceed next.

UK Prime Minister Theresa May issued her own statement confirming she had ordered airstrikes to punish the Syrian regime’s “cruel and abhorrent” behavior. She said the move was not about regime change or “intervening” in the civil war but stopping the “erosion of the international norm that prevents the use of these weapons.” French President Emmanuel Macron said: “We cannot tolerate the normalization of the use of chemical weapons.” Syrian state TV said the attack was being confronted by the pro-Damascus “anti-terror axis.”  The response from Tehran threatened “consequences” – both regional and international.