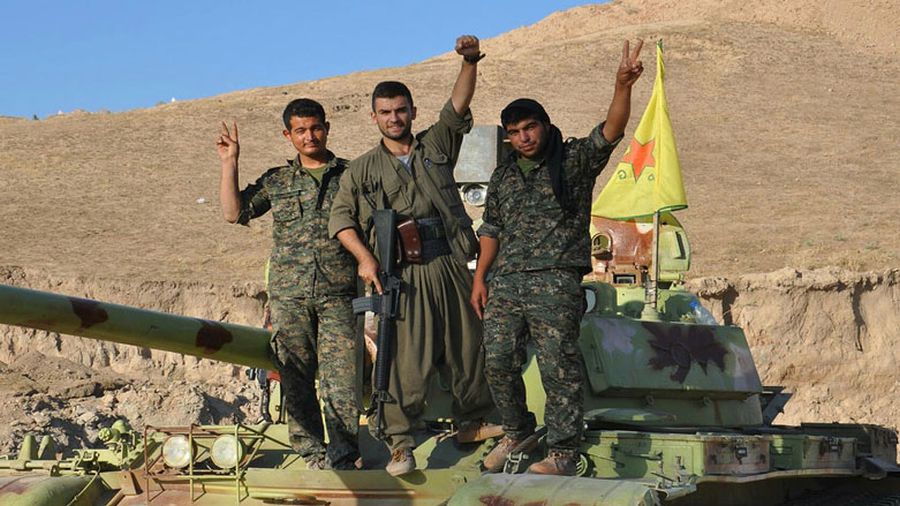 The White House said it was making “adjustments to its support for US partners” after the defeat of  ISIS in Raqqa, according to Turkish Foreign Minister Mevlut Cavusoglu.
Seven months ago, President Donald Trump decided to supply the 30,000 members of the Syrian Kurdish YPG militia with US arms, including heavy weapons, for the battle to drive the Islamic State from Raqqa,  its de facto Syrian capital. The US military command underlined the importance of the US-backed Syrian Democratic Front (SDF) led by the Kurds to beating to the draw the Russian-backed alliance of the Syrian army, Hizballah and other Shiite militias fighting under Iranian command.

But Turkish President Tayyip Erdogan never stopped complaining about US support for the Kurdish group, which he considered an extension of Turkey’s separatist PKK (Kurdish Workers Party). And so, US Defense Secretary James Mattis was sent to Ankara with a promise to take back the heavy weapons from the Kurdish fighters after the Raqqa battle. Meanwhile, amid extremely heavy casualties, the Kurdish fighters and allies achieved victory.

On Friday, Nov. 24, the White House reported that in a phone conversation, President Trump had informed his Turkish counterpart, that “the US is preparing to wind up its direct support for Kurdish forces in Syria.” This was confirmed by the Turkish foreign minister.

Last month, the Syrian Kurds’ Iraqi brethren in the KRG accused Washington of abandoning them after their Peshmerga army was defeated at the oil city of Kirkuk by the Iraqi army and Shiite militias – also under Iranian command. In his letter of resignation, of Oct. 30, Iraqi Kurdistan’s President Masoud Barzani wrote: “Instead of being rewarded by the US and other countries for pushing back ISIS three years ago, the Kurds were betrayed.”
DEBKAfile’s Middle East sources report that the Syrian Kurdish leaders, aware of the transitory nature of Washington’s support in the face of Turkey’s strong objections, had some months earlier begun developing an alternative. They embarked on secret talks with the Russians and the Syrian ruler Bashar Assad, hoping to gain special status for the three Kurdish territories in northern Syria, Kobane, Afrin and Hasakeh. Those talks will no doubt gather impetus now that the Americans have made their position known.

Meanwhile, on Sunday, Nov. 26, the YPG turned the heat on Washington by releasing hitherto unpublished figures of US and NATO troops in two of their northern Syrian enclaves, Hasakeh and Kobane. The YPG spokesman reported a total of 2,000 US servicemen (four times the figure in official US publications) and 2,000 more from Germany, Britain and France. This was the first time that German and French military forces were known to be present in Syria. The YPG spokesman added that the US-led coalition had established 10 military bases in the Kurdish enclaves including air force facilities. DEBKAfile: After these disclosures, Washington and the European forces will not find it easy to pack up and leave the Kurdish enclaves in Syria.