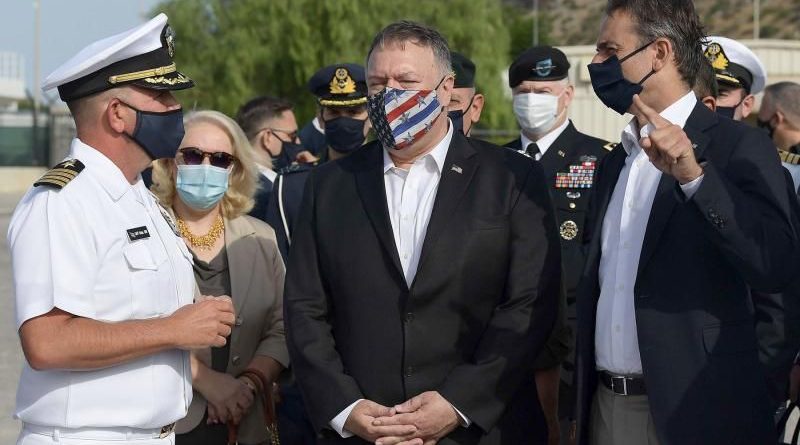 A plan to remove the highly strategic US air base from Incirlik, Turkey, to Crete, Greece, was discussed by US Secretary of State Mike Pompeo in talks with PM Kyrias Mitsotakis on Tuesday, Sept. 29, DEBKAfile’s US sources disclose. This plan was the real purpose of Pompeo’s visit to a US naval base at Souda Bay on the Island of Crete, before he sat down with Greek PM Kyrias Mitsotakis to talk about tensions with Turkey over East Mediterranean energy exploration rights.
The Trump administration seeks to beef up its military presence in the E. Mediterranean while slapping down Turkish President Tayyip Erdogan for his anti-Western rhetoric, covetous fingers in every conflicted pie in the region, and weapons deals with Moscow. The US set up its base at Incirlik during the Cold War as a vital strategic asset in the region. While home to a nuclear arsenal, the base most recently served as a launching pad for US-led air strikes against ISIS in Syria and Iraq.

But, according to the local New Khaleej, parallel talks are also in progress between Abu Dhabi Crown Prince Mohamed Bin Zayed and the Pentagon on a new home for the US Turkish air base to territory controlled by the United Arab Emirates, namely the south coast of Yemen including Socotra island which the UAE has taken over.

The Pentagon spokesman Lieutenant Colonel Thomas Campbell denied any move out of Incirlik was imminent. And indeed, DEBKAfile’s Washington sources say, the evacuation of America’s assets from the airbase in Turkey to Emirati territory would transfer a US nuclear arsenal out of a NATO country and over to the Persian Gulf region for the first time.

Ron Johnson, head of the Senate foreign relations subcommittee for Europe, suggested this month that the US presence in the greater region is “hugely important,” given growing designs by Russia and China and Turkey’s intervention in Libya and aspirations in the eastern Mediterranean.

The deterioration of relations between Greece and Turkey, both NATO members, have drawn Pompeo into a bid to calm the tensions, initially by forcing Erdogan to withdraw a survey vessel escorted by warships that sparked the crisis on Aug. 10 by exploring waters claimed by Greece. Athens has agreed to preliminary negotiations with its old enemy but only on their “maritime differences.”

Greece is strongly supported against Turkey by Israel in view of their shared energy interests including a projected export pipeline to Europe. Foreign Minister Nikos Dendias visited Israel at the peak of the first coronavirus wave for talks with PM Binyamin Netanyahu on the dispute.