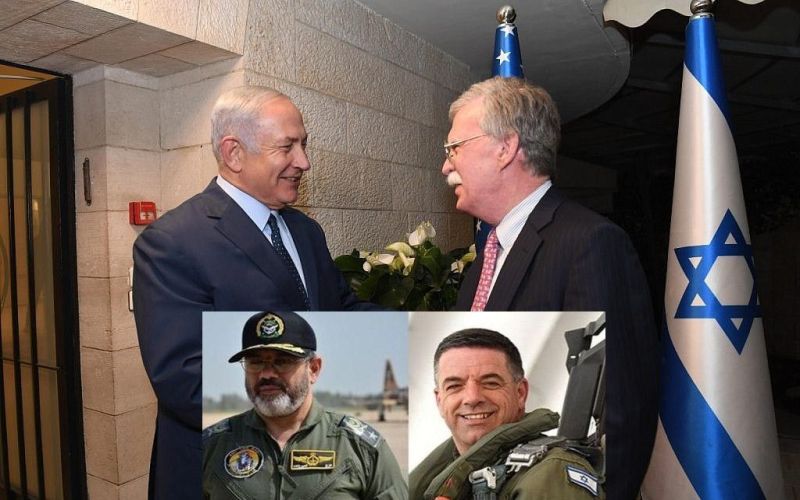 A combined US-Israeli air and special forces operation targeting the backbone of Iranian military capabilities in Syria is in an advanced state of planning. It will single out four critical entities. One is a person, Al Qods chief Maj. Gen. Qassem Soleimani, supreme commander and strategist of Iran’s Middle East warfronts, along with his general staff. The others are the Revolutionary Guards’ (IRGC) foreign arm, the Al Qods Brigades and its Basij militia – their command posts, bases and military assets; 21 imported Shiite militias – the most prominent of which come from Iraq, Afghanistan and Pakistan; and the Lebanese Hizballah (whose partial evacuation and mutiny against Soleimani are covered in a separate article.)

The last touches to the US-Israeli operation were made during US National Security Adviser John Bolton’s visit to Israel (Aug. 20-22), in the conversations he held with Prime Minister Binyamin Netanyahu and his working sessions with military and intelligence officers and members of Israel’s national security council.

The finalized operational blueprint is revealed by DEBKA Weekly’s military and intelligence sources as the product of four months’ work by mixed US-Israeli teams ever since President Donald Trump took the US out of the 2015 nuclear deal with Iran on May 8. The action is designed to hinge on operations by US and Israeli special and air forces that will aim to systematically grind down the military infrastructure put in place in Syria by the IRGC’s Al Qods and its minions. This mission is estimated to spread over several months until the spring of 2019 – unless, of course, Tehran is driven by the crippling pressure to bolt of its own accord, reckoning that the price for staying in Syria is anyway beyond its straitened financial circumstances.

The US and Israel have pledged to have one another’s back in the joint operation. For instance, Israeli air strikes deep inside Syria (close to its borders with Iraq or Turkey) or missions against pro-Iranian targets in Iraq, will have the support of a US aerial umbrella – and vice versa. When the special forces of one side is on a raid, the other side will have ground forces ready to come to its partner’s aid if it runs into trouble.

DEBKA Weekly’s sources disclose that Bolton was planning to brief his Russian counterpart Nikolay Patrushev on the broad lines of the US-Israeli plan of operations, when they meet on Thursday, Aug. 23 in Geneva. Russian President Vladimir Putin called his Security Council into session in Sochi on Wednesday, to prepare Patrushev for this important encounter. Kremlin spokesman Dmitry Peskov said the two security advisers would discuss “a lot of issues and they are sensitive.”

Their meeting was the first follow-up on the understandings the US and Russian presidents reached at their tête à tête in Helsinki on July 16. Their talks focused heavily on the Syrian question and Iran’s removal from the country. Putin said he had no objections to throwing the Iranians out of Syria but didn’t see how it could be done at this stage. In that case, Trump replied, it would have to be managed without Russia. He received the same answer that Putin gave Prime Minister Binyamin Netanyahu when they talked in Moscow on July 12: Russia would not interfere with Israel military moves in Syria so long as the Assad regime was not destabilized or harmed. The same stipulation would apply to American military moves in Syria.

But much depends on whether Patrushev was armed with this guideline at his meeting with Bolton in Geneva. If it remains in force, then the Americans and Israelis will embark on their joint operation against Iran in Syria without delay. But if the Kremlin raises new objections, then Trump will have to decide whether to respect Putin’s change of heart and delay the operation or go ahead regardless. Our sources note that the US President is moving from words to deeds in his approach to Iran’s presence in Syria much faster than he did for North Korea. As far as Israeli is concerned, the Netanyahu government sees the onset of a direct military operation against Iran and its proxies in Syria, at the very moment that the seven-year Syrian civil war is winding down.